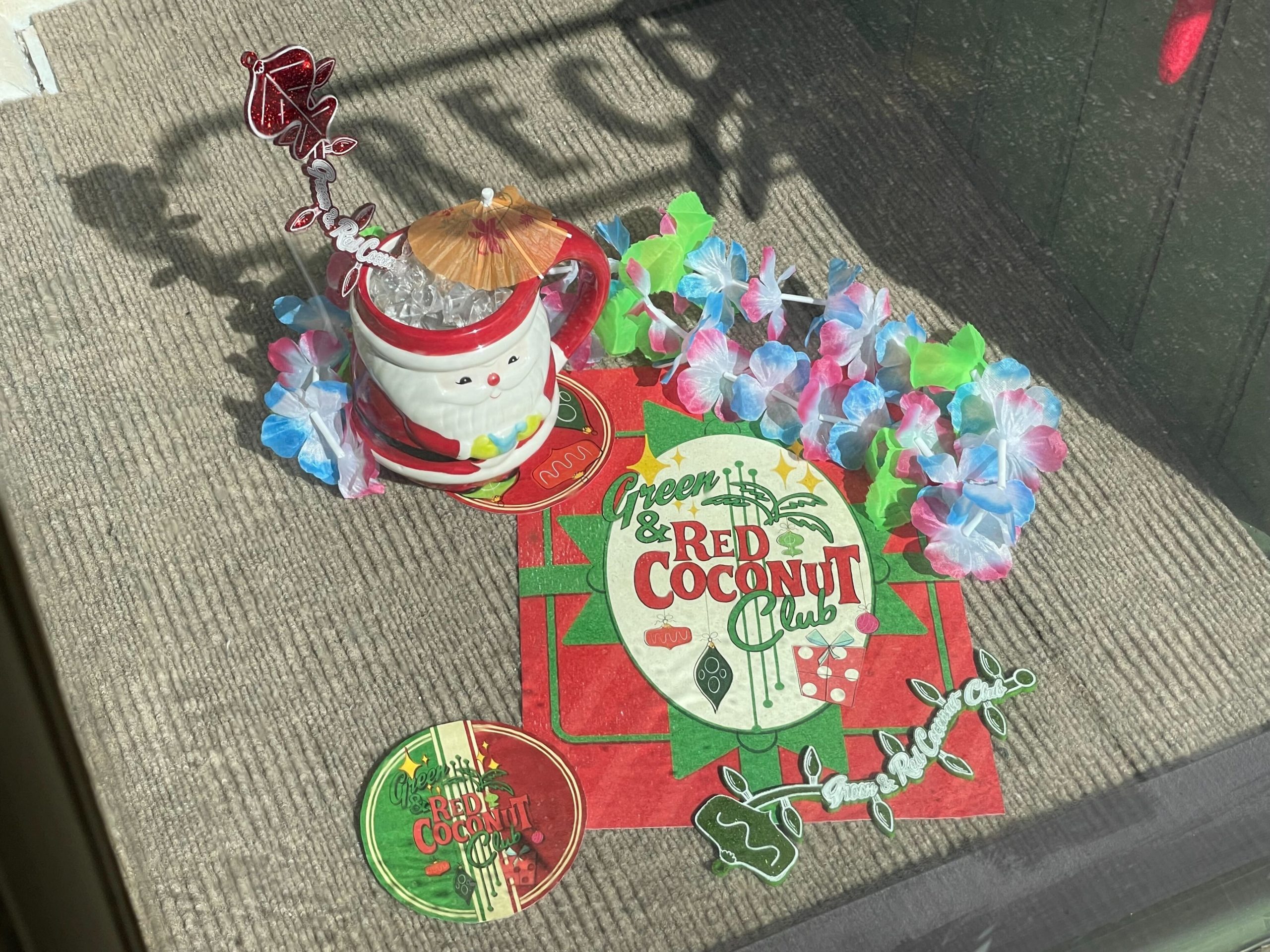 Last night, we saw some hints of the new theme at the club.

We could see a billboard inside “Earl’s North of the Border.”

And another billboard featuring trees. The words “Green” and “Coconut” were just barely visible, but we couldn’t be sure of the club’s new name.

Last year, the Red Coconut Club dressed up for the season (as pictured above) and offered a special menu. It looks like after the success of the Dead Coconut Club, they’ll be ramping up the Christmas cheer this year.

The Red Coconut Club is located on the second story of Universal Citywalk Orlando, next to Bob Marley —A Tribute to Freedom.

In this music shop window, an Elf on the Shelf overlooks a flyer for the Green & Red Coconut Club.

Along with the flyer are a Santa Claus mug, lei, swizzle sticks, and coasters.

No opening date for Green & Red Coconut Club has been announced, but it will probably open around the same time as the Holiday Tribute Store.

The holiday celebrations at Universal Orlando Resort begin on November 12. Mistletoe Pines Village and the Holiday Tree Hunt are expected to return to CityWalk as well.

Inside the parks, you can celebrate the season with Universal’s Holiday Parade featuring Macy’s, performances by Mannheim Steamroller, plus the holiday tribute store and special food & beverage offerings. Last year, the giant Christmas tree received an upgrade with dancing lights. Guests can pay to have their photos displayed in the tribute store.

At Islands of Adventure, guests can enjoy the Grinchmas Who-liday Spectacular and very merry decor in Seuss Landing, plus seasonal shows and decorations at The Wizarding World of Harry Potter.

If you’re looking to check out all the offerings VIP-style, Universal’s Holiday Tour is returning this year. It offers guests reserved viewing for the parade, Grinchmas, and the Magic of Christmas at Hogwarts Castle. It also includes photos with Santa. Holiday treats will be available, including small plates of cookies, Who Hash, Chicken & Waffles, and Popcorn Shrimp, plus non-alcoholic beverages and a hot cocoa bar at Circus McGurkus Cafe Stoo-pendous.

We took the tour last year and it was an incredible value for the price, which is $79.99 per person. You can see our full review, video, and photos here.

The Grinch & Friends Character Breakfast is also returning this year.