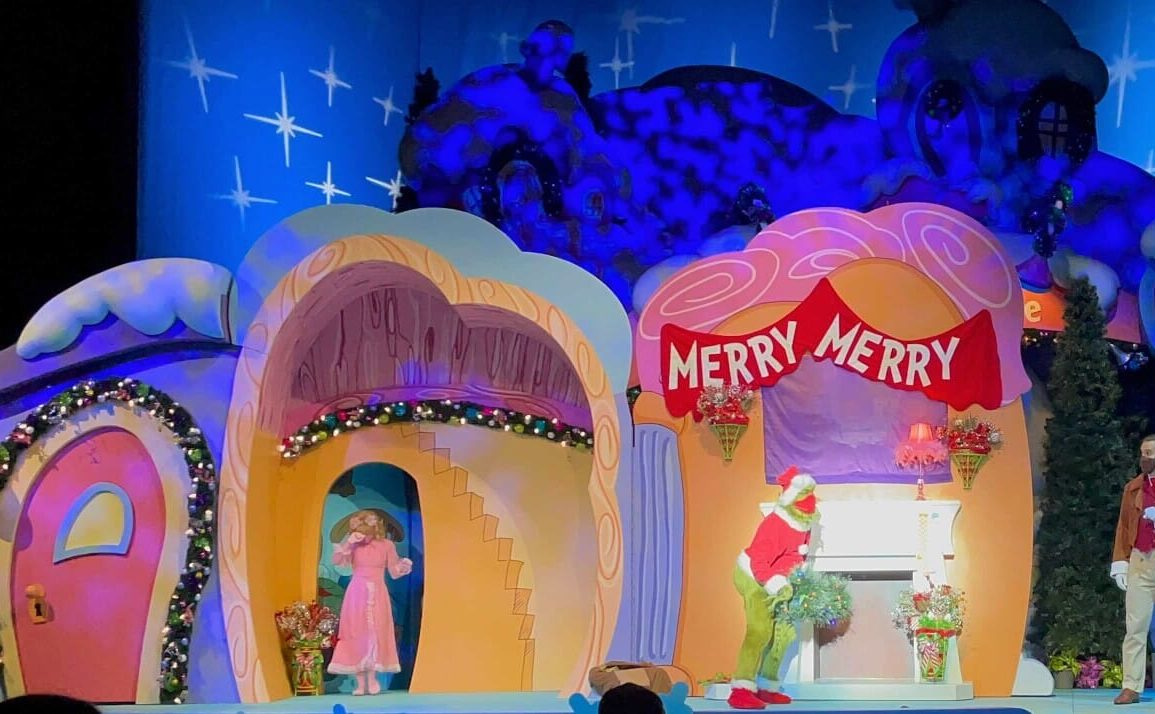 Merry Christmas and Happy Who-lidays from the Universal Orlando Resort. The Awesomest Celebration of the Season has officially started bringing back many of our favorite holiday favorites. Last year, the Christmas offerings were modified due to CODIV-19, but this year we’re excited to have everything returning in full. The Grinchmas Who-liday Spectacular is a must-see show when visiting Universal Orlando during the Christmas season.

The entrance for Grinchmas is located in Seuss Landing between Circus McGurkus Cafe Stoo-pendous and 1 Fish 2 Fish Red Fish Blue Fish. Signs will point you towards the entrance, which takes you on a pathway backstage towards the former Blue Man Group theater.

This year, the show will be held inside the theater where the Blue Man Group previously performed. This is a huge improvement from the old soundstage setup.

Outside the theater, guests can wander around the courtyard and grab snacks.

The padded seats in this theater are much more comfortable than the hard seats in the old soundstage.

The set is largely unchanged from 2019’s version.

Much like all of Seuss Landing, you won’t find straight lines here as the show emulates Dr. Seuss’s iconic cartoon style.

The actors are all masked, but the quality of the show is as high as ever. The dialogue and songs were clear and unmuffled.

The show’s narrator, pictured above in the spotlight, engages in witty back-and-forth banter with the Grinch.

This interpretation of the classic “How the Grinch Stole Christmas” borrows heavily from the original book as well as the 2000 film starring Jim Carrey.

This very sleepy Who is always a crowd favorite.

If you’ve never seen the show, it is fantastic, but be sure to arrive early to get good seats. Shows do fill up, but luckily, there are several performances a day. You can find the times on the sign outside, including those with an American Sign Language interpreter present.

You can catch the full show in our video below.

Are you excited about the return of Grinchmas to the Universal Orlando Resort? For even more, be sure to stop inside All The Books You Can Read in Seuss Landing for a meet and greet with the Grinch! Happy Who-lidays!

Previous
PHOTOS, VIDEO: The Grinch Meet and Greet in Seuss Landing at Universal’s Islands of Adventure