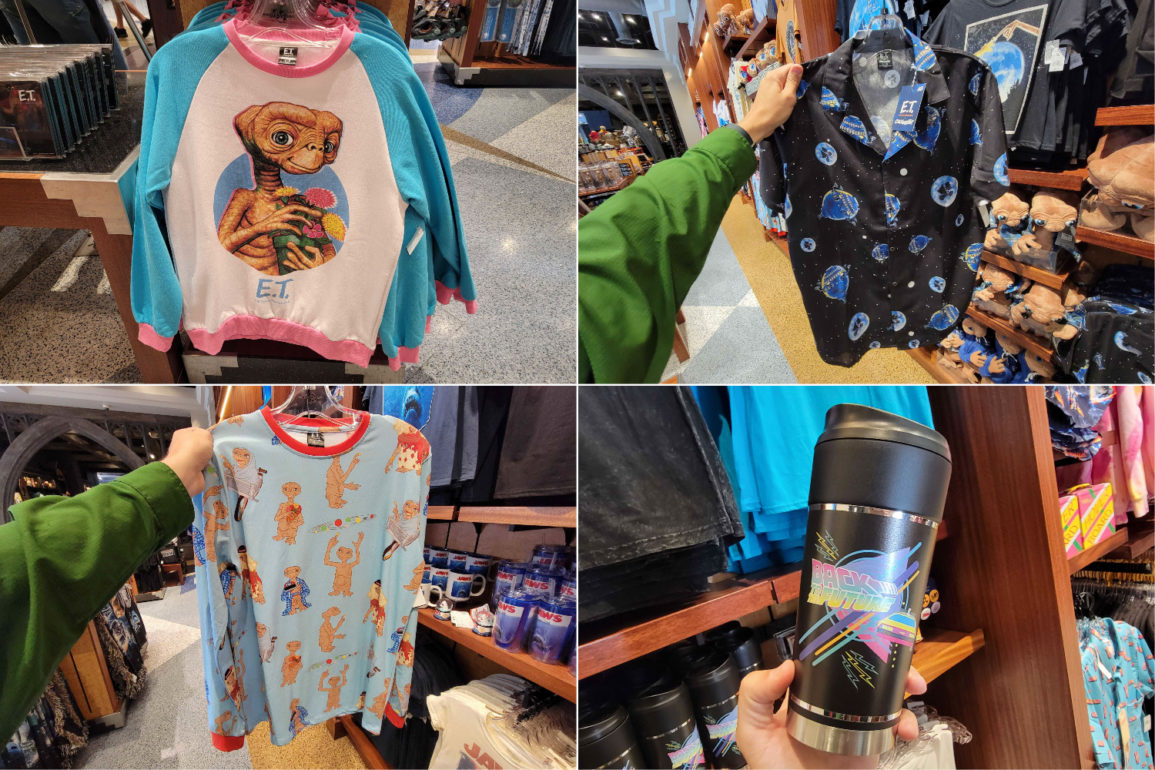 More Retro ‘Back to the Future’ and ‘E.T.’ Anniversary Merchandise Comes to Universal Studios Hollywood

A new collection of retro merchandise recently debuted at Universal Studios Hollywood, and it’s not done yet. With “E.T.,” “Back to the Future,” and “Jaws” each receiving their own collections and a fourth collection of the three movies together, there is plenty of new merchandise to go around. Now, we can add these late arrivals to the plethora. We found these new items at the Universal Studios Store on the Upper Lot.

Back to the Future Neon Tumbler – $26

This very bright and busy neon design consists of mostly pinks, blues, and yellows. The film series logo uses all three, with a DeLorean in similar colors next to it. Around are triangles, lines, and even lightning bolts to accent.

A Universal Studios logo takes center stage as Jaws, a DeLorean, and E.T. himself represent their respective films.

The front of this collab flannel shirt features E.T.’s head popping out of the front pocket.

The back reads “E.T. Phone Home” in large letters.

E.T. sits off-center with a lit heart and finger as the line art words “Be Good” sit to the left and below.

This set features an all-over print of E.T. in various costumes and disguises, as well as playing with different Earth objects.

This frame reads “Stage Pass E.T. The Extra-Terrestrial” on the bottom and shows the flying scene in the red silhouette above. “E.T.” is above some house silhouettes on the right.

Taking inspiration from more modern poster art styles, E.T. sits at the center of this sweater, with his spaceship taking off to the right and Elliott and E.T. flying on the left.

This very 1980s-style sweater show E.T. clutching a pot of flowers at the center with the film’s logo below. The sleeves are a light blue with pink lining the collar, sleeve holes, and waist.

This collab with Cakeworthy shows stars all over with E.T.’s spaceship and the iconic flying past the moon scene.

A number of these items were already available at the Summer Tribute Store in Universal Studios Florida, which you can check out a full tour and a comprehensive merchandise roundup here on Universal Parks News Today.