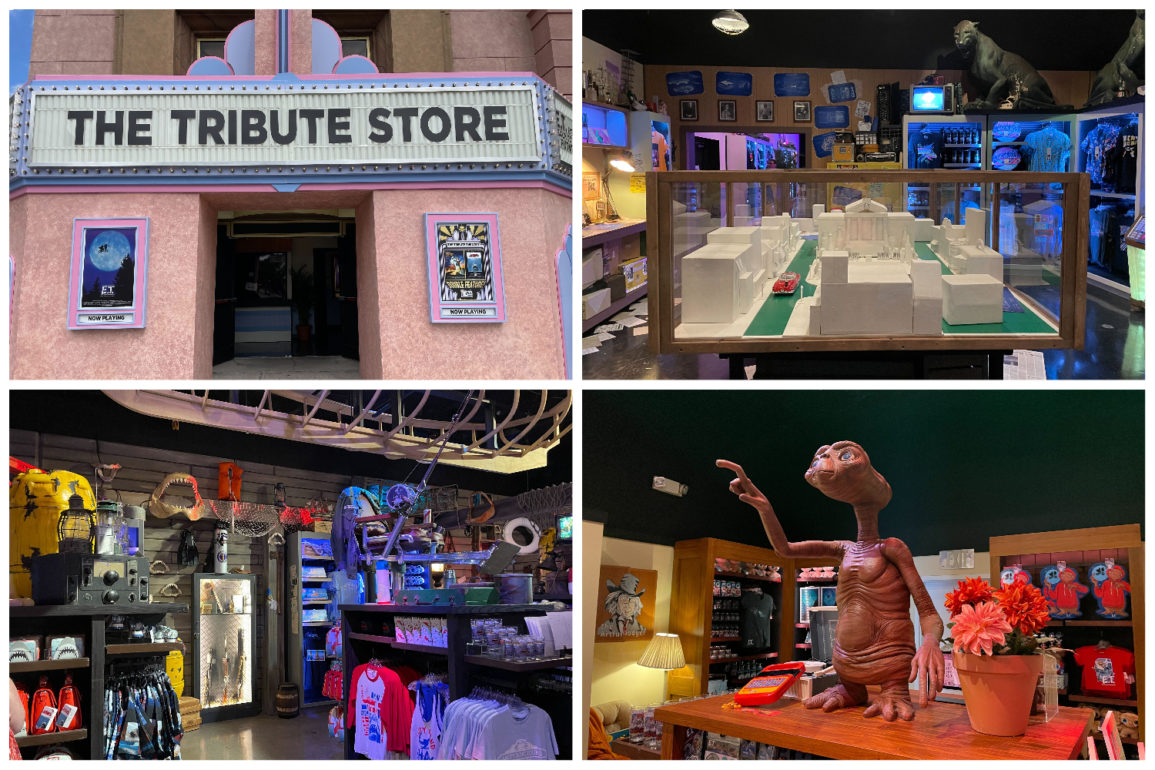 Full Tour of Classic Movie-Themed Summer Tribute Store Featuring Jaws, Back to the Future, and E.T. at Universal Studios Florida

After releasing a sneak peek this morning, Universal Studios Florida has opened the doors of the summer Tribute Store, featuring rooms inspired by “Jaws,” “Back to the Future,” and “E.T.”

The outside of the Tribute Store resembles a retro movie theater, with an “E.T.” poster and double feature “Back to the Future” and “Jaws” poster. Running lights around the marquee and neon lights add to the classic theater vibe.

A simple ticket booth is in the entryway with a sign saying “Will be back in 5 minutes.”

The counter is covered in ticket stubs for the films “E.T.”, “JAWS”, and “Back to the Future”.

The tickets are for the three classic movies featured in the store. There is also a pile of Reese’s Pieces, a good indication that we might just encounter E.T. soon.

There are posters for other classic movies, including “1941” and “The Thing” (1982). The colors of the walls are the same colors as the old soundstages.

Each room of the store is labeled as a “theater.”

“E.T.” is “now playing” while the other films are “coming soon.”

The room is inspired by Elliott’s room and extremely detailed.

There’s new and old “E.T.” merch. Since it’s E.T.’s 40th anniversary, there is tons of things to choose from in here. Stay tuned for our full post with photos and prices!

E.T. himself is atop a merch display with a pot of geraniums, Speak & Spell, and record player.

There are rainbow blinds on faux windows. The mountain and landscape that is seen outside of the windows is the exact same that would be visible from Elliot’s home.

Football and Hulk posters hang on the wall next to the desk. Props that are similar to those found in the movies can be found all over the desk.

The desk is covered in board games, space books, and more. A lot of effort was put into making sure this desk was covered in fun movie details.

There’s a viewfinder toy and reels on the shelf. These toys are perfect and very fitting for the time of the film.

A Coors ball cap sits on a Big Trak vehicle.

E.T.’s ship is built out of bricks from the Universal Building Set on the shelf.

The calendar on the wall shows that it is October 1981.

A cozy armchair is covered in more toys and a corduroy blanket. The furniture in this room is made by the same company that made the furniture used in the film. We heard that the team managed to find an authentic set to use in this store!

More Reese’s Pieces can be found throughout the room.

A space diorama hangs from the ceiling.

Gertie has been using this chalkboard. E.T.’s spaceship is drawn on a chalkboard along with “the man from the moon”.

A Raggedy Andy doll sits atop this shelf. You’ll also spot a wooden toy of E.T.’s space ship, like the one from the Holiday Tribute Store.

There are markers and drawings of E.T. and his spaceship.

Another desk holds a globe and dinosaur toy.

An E.T. Adventure passport sits atop a postcard from Elliot’s dad in Mexico. There are just so many incredible details, you could spend all day in here.

The transition from “Theater 1” to “Theater 2” takes you through the closet from the film. You’ll find clothes on one side and stuffed animals on the other side. Can you spot E.T. hidden among the plush? As we make our way into the next room, the “Jaws” poster leads us right into the next film.

This room resembles Quint’s dockside house. The frame of a boat hangs from the ceiling.

There are shark jaws and fishing equipment hanging on the walls.

Fishing nets hang from the rafters.

Quint’s captain’s seat complete with his jacket is atop a merchandise display.

There are some ship wheels and an old-fashioned stove.

An orange light shines from beneath the stove and steam comes off the pot.

On this table is a torn-up flyer for Mayor Larry Vaughn, newspaper clippings, business cards, and more.

More newspaper and magazine clippings, as well as photos, are stuck to the walls and displays. A cabinet holds more hunting materials.

A T.V. plays the original preshow/queue video from “Jaws.”

A “Jaws” Mold-A-Rama machine lets you create a shark-shaped model. This is different than the one in the Universal Legacy Store in CityWalk.

The $8 model is shaped like the shark emerging from the water, with the “Jaws” logo below it. The machine is decorated with photos, blueprints, and shark drawings.

There are some details hidden around associated with the defunct attraction.

A sweet tribute to a former JAWS skipper and his son can be seen on a barrel.

After the “Jaws” room is a simple hallway lined with more classic movie posters.

All of these films are “Coming Soon”.

“Back to the Future” is now playing in Theater 3.

Back to the Future Room

Doc’s model of Hill Valley town square is at the center of this room in a glass case.

The not-to-scale model is made of various materials Doc found around his workshop, all painted white.

A red toy car and blueprints sit on the model.

At the other end of the display case are notes from Doc, a picture of the Lyon Estates billboard, the donation cup for saving the clock tower, and the “You’re Fired!!!” fax from “Back to the Future II.”

Marty’s girlfriend, Jennifer, wrote “I love you!” and a phone number on the back of this flyer.

There’s a Mold-A-Rama machine, where you can create your own Hill Valley clock tower model for $8.

The machine is decorated with blueprints, newspaper clippings, and flyers from the “Back to the Future” films.

We found it a little strange that the model was of the clock tower and not the DeLorean, but it is a cute shoutout to the model in the center of the room.

The entire room is based on Doc’s workshop, with several clocks on the walls and crates piled in corners.

On a shelf with some of the clocks is Marty’s picture of himself and his siblings.

The giant speaker used by Marty in the opening scene of “Back to the Future” is against one wall.

Every so often, you can hear the speaker.

More newspaper clippings and hand-written notes by Doc are scattered across the floor.

There’s a poster for the “Enchantment Under the Sea” dance above a jukebox.

Several songs heard in “Back to the Future,” as well as other classics, are listed on the jukebox.

This clock holds more movie references, including the top of old Biff’s cane and the Almanac from “Back to the Future II.”

A red guitar signed by Michael J. Fox is above the desk. It’s available for purchase for $2,000.

A hover board signed by the cast of “Back to the Future II” is available for $3,200.

Above this desk hangs a framed photo of Marty and Doc from “Back to the Future III.” Be careful — a crate of plutonium is under the desk.

A newspaper clipping on the wall reads “Brown Mansion Destroyed.”

Doc’s original drawing of the Flux Capacitor hangs next to time machine blueprints.

The QR code on this Cusco card leads to the official list of defunct Universal Orlando Resort attractions, including Back to the Future the Ride.

They debuted in “Cat People” (1982). This series of photos and notes describes their history.

They also appeared in “Problem Child 2” and “Legends of the Hidden Temple.”

From 1991 to 1997, they sat in the Universal Orlando Boneyard. Current location? Look up!

According to the sign on this door, Theater 4 is celebrating Gregory’s birthday. At the entrance to the Tribute Store, there is a themed sign encouraging guests to have their birthday at the Tribute Theater. Happy Birthday, Gregory.

You can pose like King Kong is grabbing you. Does the scenery in the background look familiar? It’s the same skyline you’ll see out in the park.

There is some extra Universal Studios merchandise in here, too.

The snack stand resembles a movie theater concession stand. It feels like you’re in the lobby, especially with the smell of fresh popped popcorn.

There’s a real popcorn machine, so be sure to grab a box of popcorn.

A giant Tribute Theater sign is behind the merchandise cash registers.

Here’s a look at some of the themed snacks you’ll find in this room. We’ll be reviewing them later. These were selling out quickly, too!

Sink your teeth into these treats!

These “JAWS” bowls seemed to be a top seller!

Can anyone resist an adorable E.T. dessert?

Fruit punch and lemonade hover board whoopie pies, with nerds, seemed to be a popular item.

A variety of popcorn balls will tempt you!

As you leave, you’ll pass projections of the Universal logo over the years, with an occasional appearance of Earl the Squirrel.

This is based on classic intermission reels with the phrase “Let’s all go to the lobby.”

A corkboard hangs on the wall with flyers, drawings, and posters you might see in the break room of a movie theater.

There are popcorn and soda filling guides. These patented “flavour enhancing cubes” sound like something the theme park down the street would use.

Halloween Horror Nights fans will find hidden details in the store as well.

There’s a potluck sign up with names of Team Members who worked on the store.

The employee art contest features drawings of sharks, the DeLorean, E.T., and Frankenstein.

At the very end is a desk with old MAD magazines and film reels.

The wall outside is covered in more classic movie posters. This is certainly a blockbuster of a Tribute Store! What do you think of this year’s Summer Tribute Store? Be sure to check out a full video tour below.

Previous
Full List (With Prices) of ‘Jaws’, ‘E.T.’, & ‘Back to the Future’ Merchandise Available at the Summer Tribute Store in Universal Studios Florida