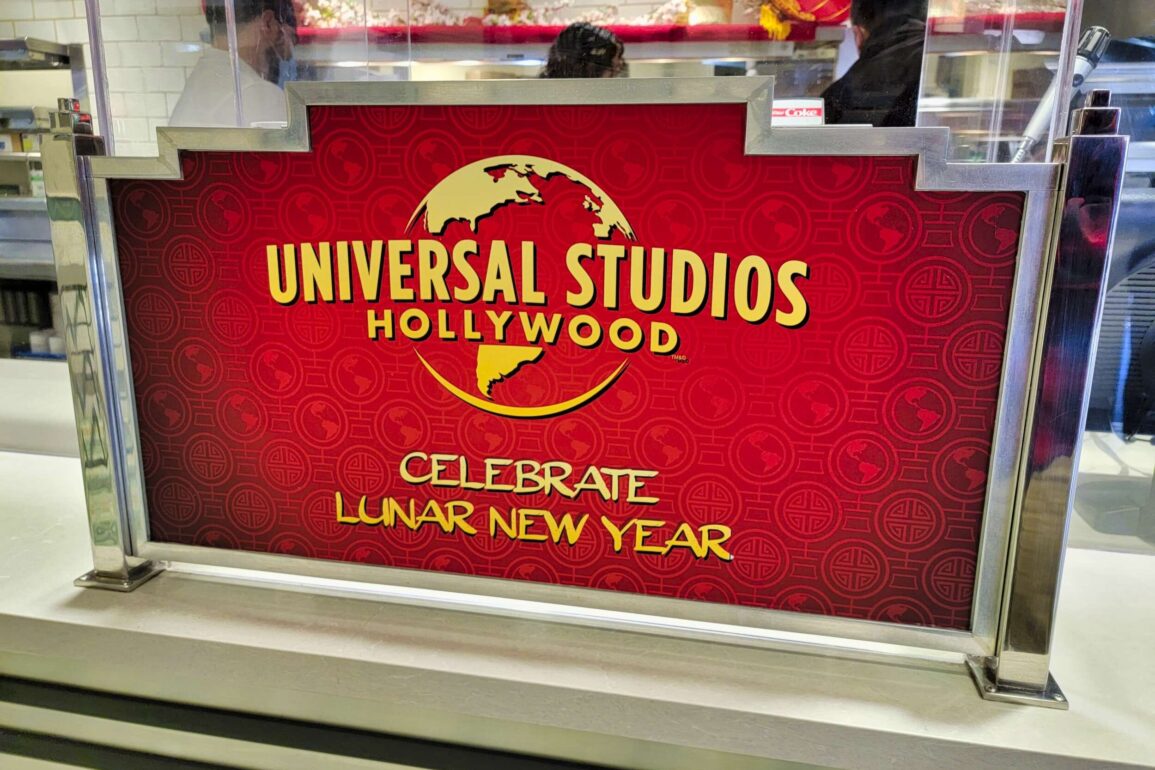 Outside Universal Studios Hollywood, Los Angeles is preparing for our hometown team, the Rams, to compete in the Super Bowl in their home stadium just a few miles from here. This may not be as big of a showing as Disneyland is currently displaying, but LA is very excited for the Rams to dominate the game (we hope).

Toothsome Chocolate Emporium and Savory Feast Kitchen is just beginning its construction. From ground level, it’s hard to see what’s happening so we had to get a bird’s-eye view from the balcony.

We can see the pavement is being pulled up and a great deal of the interior is being ripped out and discarded in this trash bin. Work is continuing, and we will have more developments as they are made available.

We had a beautiful day for park-going, and it made for some great pictures as well.

We found some new Hogwarts House sweatshirts, above, and a Death Eater sweatshirt, below, on the Upper Lot today. You can see more photos and read all about them right here.

This is the real reason we’re here today. February 1 is the actual day of the Lunar New Year, so it was the perfect time for this newly opened, seasonal overlay at Hollywood & Dine.

The interior is all decked out in cherry blossoms, lucky red lanterns, and other traditional Chinese decorations, many of which involving a tiger to celebrate the coming of the Year of the Tiger.

With so many great looking options, it was hard to choose what to order, but we settled on the Fortune Cookie Frappe, as seen above, and the Year of the Tiger cookie, as seen below. You can read our full review of both of these desserts right here.

Even Hello Kitty donned her Lunar New Year’s best to greet guests outside her shop.

Universal Plaza, which is usually the site of the much larger Lunar New Year celebration, is sitting empty this year.

We stopped by to take a tour of the backlot on the World Famous Studio Tour today and were met with a nice surprise.

The tram we were riding on is one of four electric trams in the vehicle fleet, and after a lengthy soft testing period, the trams have finally been officially launched for continuous use. You can see more photos of these green trams and read all about it right here.

Speaking of the trams, we found a fancy new scarf featuring the classic USH logo and the Studio Tour trams. You can see more and read all about it right here.

Super Nintendo World construction is coming along, with the bright blue siding of the building exteriors now being overlaid by black sheathing.

The DinoPlay for Kids area, which we saw was closed last week, has once again reopened after its refurbishment.

As we take one last look back from the spectacular vistas of Universal Studios Hollywood, we can look out over some of the greatest movie studios in the world. In the foreground, these many closely-packed buildings are the Universal backlot. In the center of the frame, the cluster of white buildings a little ways away is the Warner Bros. lot, and the WB shield logo can just be made out on the top of their largest stage. Directly above that shield logo in the frame is a cluster of white buildings and a tall white and green building to their right. That is the Walt Disney Studios lot and the tall building is the ABC Television building, with the Disney Animation building directly behind it. In one shot, we can see where many of history’s greatest films have been made.