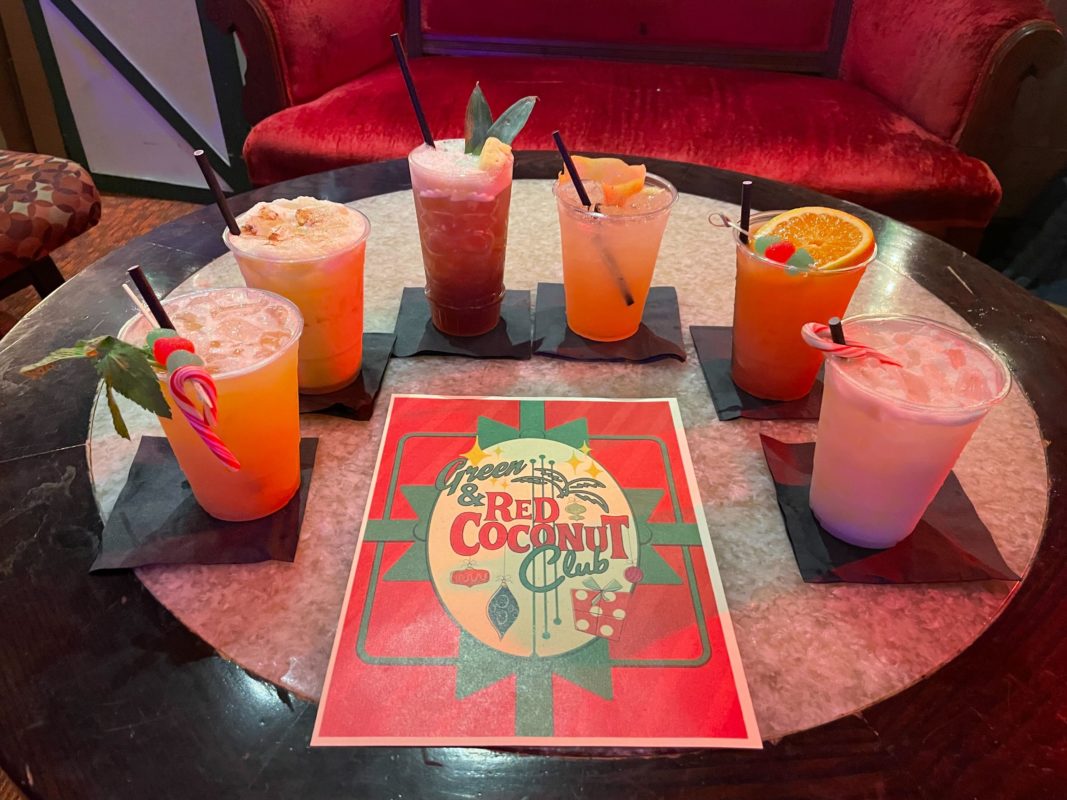 The Green & Red Coconut Club has opened at Universal CityWalk Orlando for the holiday season and they’re serving up several specialty holiday cocktails and mocktails.

The entire club has been dressed for the occasion.

The front of the menu looks like gift-wrapped presents with the logo for the Green & Red Coconut Club.

Deep and brooding holiday punch featuring pineapple, lemon and blackberry flavors, along with bourbon, allspice and coffee liqueurs, topped with a pineapple wedge and pineapple fronds

This is the most tiki drink of the bunch,  but with a twist. It was our favorite at first, but about half way through, things started to go downhill.

There’s a strong coffee and lemon flavor, which reminds us of the Mardi Gras coffee they had back in 2021. There’s a fruity sweetness, but a slight bitterness from the coffee. Better to give this one than receive it. It’s worth a try for something different, but you’ve been warned.

Warm cinnamon together with even warmer tequila, balanced with tart grapefruit and lime juices, and topped with fever tree grapefruit soda and a grapefruit zest

Ultimately, the Cinnamon Swizzle Paloma was our favorite. It’s strong but goes down smooth.

It’s a beautiful Paloma with tart grapefruit and tequila complemented by cinnamon. It’s got a little bit of fizz to it from the grapefruit soda. This is definitely one we will return for.

Rich spiced rum and allspice liqueur combined with orange and lime juices, cinnamon, and a touch of bitters. Topped with an orange wheel and festive spice drop candies.

This is a cousin of the Mai Tai or one of those “tastes like potpourri” kind of drinks. It’s topped with gum drops and the drink tastes like a strong orange with an overpowering spice taste.

There’s a fine line between the naughty and nice list and this is bad. The candy cane and gum drops are fun, but the drink is a failure. It grew on us a little bit the more we drank, but it’s still our least favorite of the cocktails.

We have mixed feelings on this one. It’s definitely not going to be for everyone. The mint flavor is strong, but there’s also a lot of pineapple and coconut flavor.

At first, it tastes like drinking a pina colada after brushing your teeth. A few sips later, the vanilla and mint stood out more than the fruity pineapple taste. It grew on us, too.

This mocktail is creamy, almost like a mango creamsicle flavor.

Finally, this mocktail cooler tastes like straight Dole pineapple juice. It’s simple and basic, so would probably be great for kids.

Which Green & Red Coconut Club drink are you hoping to try? Let us know in the comments and read more about the holidays at Universal Orlando Resort: