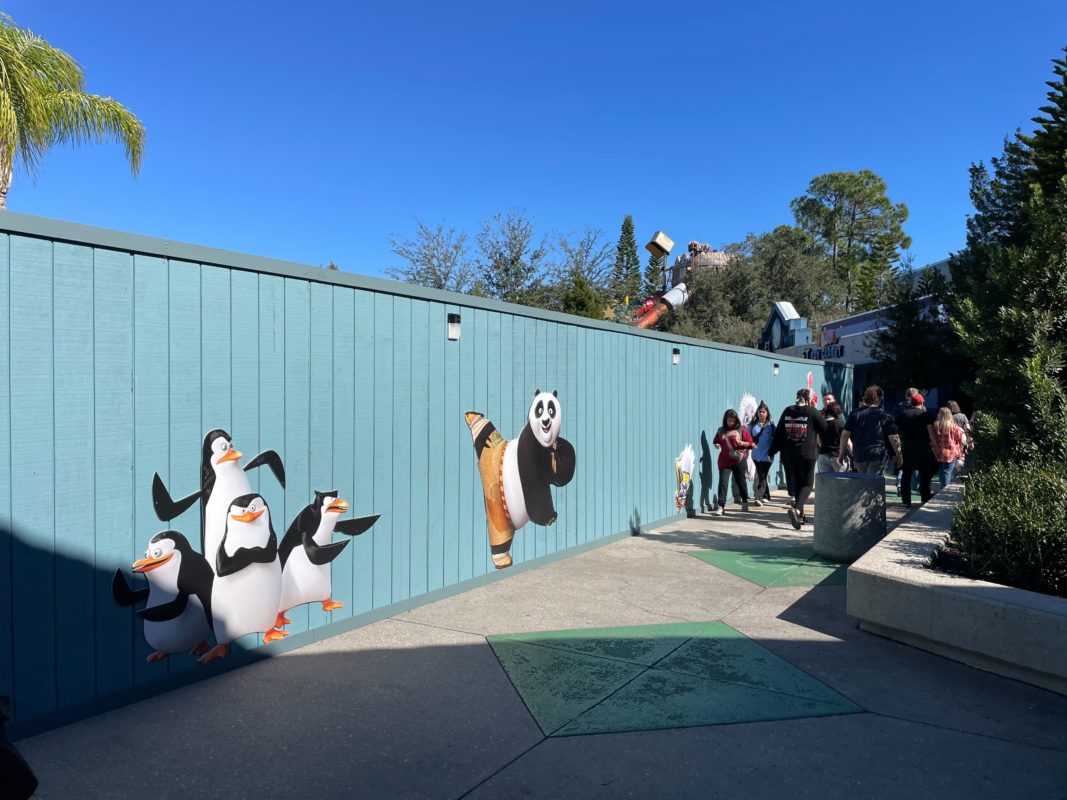 Is Universal Orlando Resort trying to tell us something…

January 15 marked the end of KidZone at Universal Studios Florida, which is a section of the park that many Universal fans grew up enjoying. Perhaps you enjoying whipping by on Woody Woodpecker’s Nuthouse Coaster, getting a little wetter than you expected on the water slide in Fievel’s Playland, or shooting toy balls in the Curious George Goes to Town play area — no matter what your memories are made of, they are now just that, memories.

Yesterday we saw walls go up around most of KidZone as Universal prepped for construction. The walls extend from the entrance of E.T. Adventure to the front of the KidZone signage, which is wrapped in black plastic. Although demolition will likely begin shortly, the land’s replacement has yet to be confirmed. Today we noticed new decor on the construction wall.

There are now DreamWorks characters splattered all across the walls. Let’s take a look at the walls, where they are placed, and what DreamWorks films are being represented here.

Below, we can see the queue for E.T. Adventure is lined with construction walls blocking the view of the now shut-down land. They have been decorated with characters decals as the ride is still fully operational. We can see decals of Puss in Boots: The Last Wish, The Boss Baby, Shrek, The Croods, and more.

Here we can see How to Train Your Dragon characters Toothless and Hiccup Horrendous Haddock III.

Shrek and Donkey high-five next to characters from Captain Underpants: The First Epic Movie.

The front of E.T. Adventure carries out the construction walls, still allowing guests to easily access the attraction.

The sign also wraps around Animal Actors On Location!, which is still fully operational and can still be accessed from the bridge leading to Springfield. U.S.A. We can see the popular IP Trolls being represented here as well.

With the construction walls being quite extensive, it is nice that they have some theming on them.

In the past, we have seen Universal place sticker decals of characters that will be taking over shutdown attractions. Shrek 4-D is a prime example, with the Minions being placed all over the construction walls. Fast-forward from that, and we have the announcement of Villain-Con Minion Blast. With a new family-style theme park coming to Texas that will likely utilize DreamWorks IP, and the rumored How to Train Your Dragon section possibly finding a home at Epic Universe, it would not be too shocking to see Universal Orlando Resort pull in more DreamWorks.

We also recently saw DreamWorks Destination take over the Barney section of KidZone prior to the closure, showcasing Universal’s desire to place more DreamWorks IP in that section. Signage here showed off IP such as Kung Fu Panda, the Madagascar series, Trolls, and the Shrek series.

That being said, there has not been official confirmation as to what exactly will be taking over KidsZone at Universal Orlando Resort.