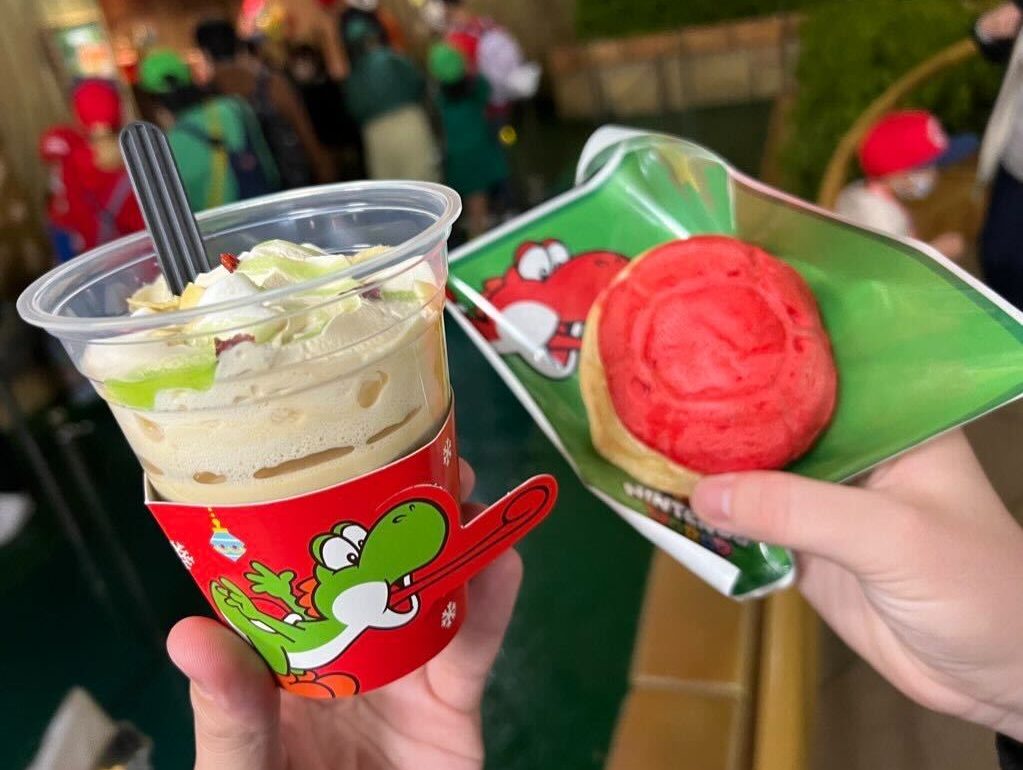 Yahoo! Along with the winter menu over at Kinopio’s Cafe, the well-hidden Yoshi’s Snack Island within Super Nintendo World is also serving up some new holiday fare with a Red Shell Calzone and a new hot drink. Naturally we headed down to Universal Studios Japan to try them out!

True to the original Green Shell Calzone, the Red Shell Calzone looks quite a bit like its in-game counterpart.

It comes served in a special green wrapper with a red Yoshi trying to eat it. A Super Star covered in ribbon is atop.

This was decidedly my favorite of the two calzones on offer, although Tom disliked this one. While it still was not mind-blowing, I found the flavor of the spaghetti to be satisfactory, and fortunately there was actual tomato sauce rather than ketchup as advertised. Like the Green Shell Calzone, there’s some cheese on the inside as well. Considering how chilly things get in Osaka during the winter, this will be a welcome snack when things get cooler next month.

Yoshi’s Hot Apple Tea is definitely the sort of thing I would look for on a chilly winter day in Osaka, but that’s mostly because I’m a huge sucker for apple tea. The top is decorated with marshmallows, whipped cream, and dried apple and strawberry pieces, all of which compliment the tea itself excellently.

The key difference between the original opening day tea and this version seems to be… the sleeve has changed to be more Christmasy, now red instead of yellow.

There’s a minor problem that comes when you get down to just tea, and that’s simply because it’s a bit watery. It’s not a dealbreaker by any means, it’s still something that will warm you up on a chilly day with a nice, fruity touch. Otherwise, it has a delightful apple flavor (which could use less water) complimented by lots of whipped cream and toppings. Despite my slight forthcomings, you’re not likely to be disappointed with this choice either!

Both of these are now available at Yoshi’s Snack Island in Super Nintendo World, part of Universal Studios Japan! Will you try either of these delights this holiday season? Let us know in the comments below!