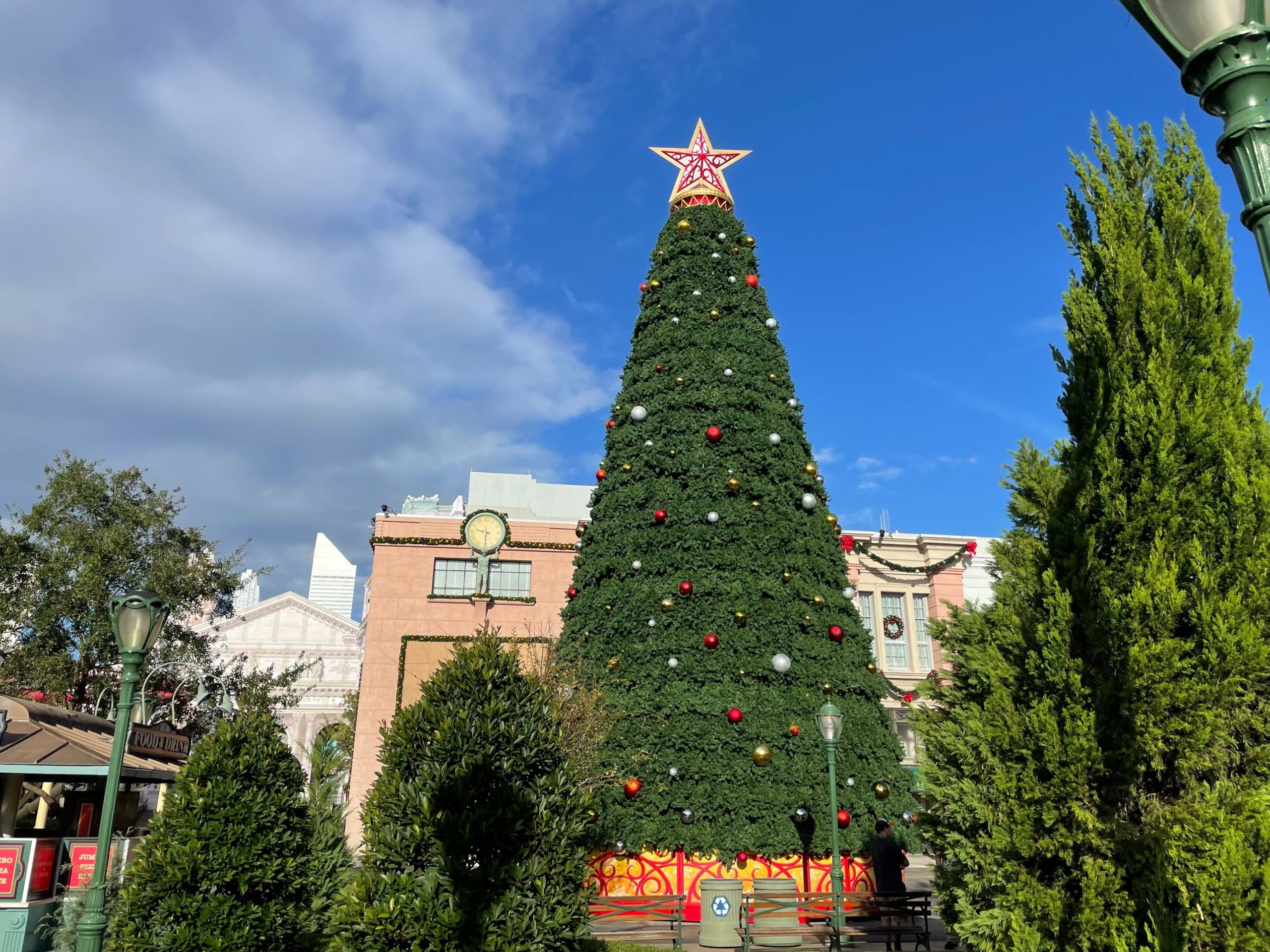 Christmas isn’t just taking over The Wizarding World of Harry Potter, but all of Universal Studios Florida. Holiday decorations can now be seen in almost every inch of the park.

We were excited to see the Universal Studios Florida Christmas tree towering over the New York area this morning.

The tree sits on a red and gold base.

It has a matching red and gold star on top.

Make sure to look for Earl the Squirrel in the tree on your visit.

Garland lines the nearby buildings, including the Metropolitan Tribune façade.

This garland is punctuated by small gold monkey figures.

Some of the monkeys resemble the Barrel of Monkeys toys.

The firehouse next door has a wreath on the door.

The wreath is decorated with silver and red ornaments, plus white marshmallows.

A splatter of green slime is on some of the marshmallows and an ornament — a reference to the Ghostbusters.

Across the street, the fake subway entrance and J. Stein & Co. façade have been decorated with garland and wreaths.

Stockings hang from the edges of the J. Stein garland.

There’s no sign of the Tribute Store façade yet.

Garland with red bows hangs above the entrance and windows.

A collection of Christmas trees are on the awning above the entrance.

A piece of garland with blue bows and snowflakes has been attached to the awning above the Revenge of the Mummy lockers entrance. More blue snowflakes hang above.

More garland lines the stairs and buildings in the smaller streets of New York.

Each façade has a different color scheme or theme to its decorations.

Garland on the Walgreens façade has prominent red ornaments.

Solid-colored tinsel hangs around some of the windows.

This fire escape has a garland full of purple, silver, and blue ornaments, with one large ornament hanging from the front.

The street signs are also decorated with garland, and a red snowflake is on the end of this one.

Starbucks has gotten in on the decorating, with garland full of giant sparkly snowflakes.

A large silver bow and two wreaths are on the side of this façade, between strips of garland.

Betty Boop was celebrating the holidays in Hollywood.

Giant wreaths hang in some of the windows, while garland lines the street’s awnings.

The Ralphs façade has a large wreath made of red ornaments and giant red bow.

The biggest wreath hangs above Five & Dime, with a ring of golden ornaments at its center.

Scwab’s Pharmacy has its own wreaths decorated with silver bows and rings of blue ornaments.

The garland above the façade also has blue and silver decorations.

And The Darkroom has black and white decorations in its garland.

The vertical garland on the Max Factor façade has large pointed ornaments dangling from the ends.

After our first pass through the Hollywood area, Santa hats were added to lampposts.

These are one of our favorite details of the holiday season.

Light-up stars were also added to the posts.

It’s the final holiday season for most of Woody Woodpecker’s KidZone, including Shrek’s Swamp Meet, which was only just set up in July 2022 to replace the old meet-and-greet location in Production Central.

Shrek, Donkey, and Fiona decorated the small building, which was a Barney-themed store before it became a swamp.

Garland full of acorns, berries, and pinecones is wrapped around planters and sign posts.

The garland on this faux stone planter includes poinsettias.

There are even tiny bird nests in some of the garland.

Inside, there are wreaths on the backstage door and photo podium, as well as small Christmas trees.

A few ornaments have been added to the tree branches that stretch across the ceiling.

A larger Christmas tree is next to the spot where Shrek, Donkey, and Fiona appear. A strip of garland is also below Donkey’s barn window.

At SpongeBob StorePants, there are several small Christmas trees with long red ornaments.

The only holiday decorations in the World Expo area so far are these purple Christmas trees in the MIB Gear Shop.

The trees have ornaments in different shades of green.

Special Christmas trees for the Holiday Tree Hunt will be revealed soon. Crates are already in several of the stores teasing the upcoming hunt.