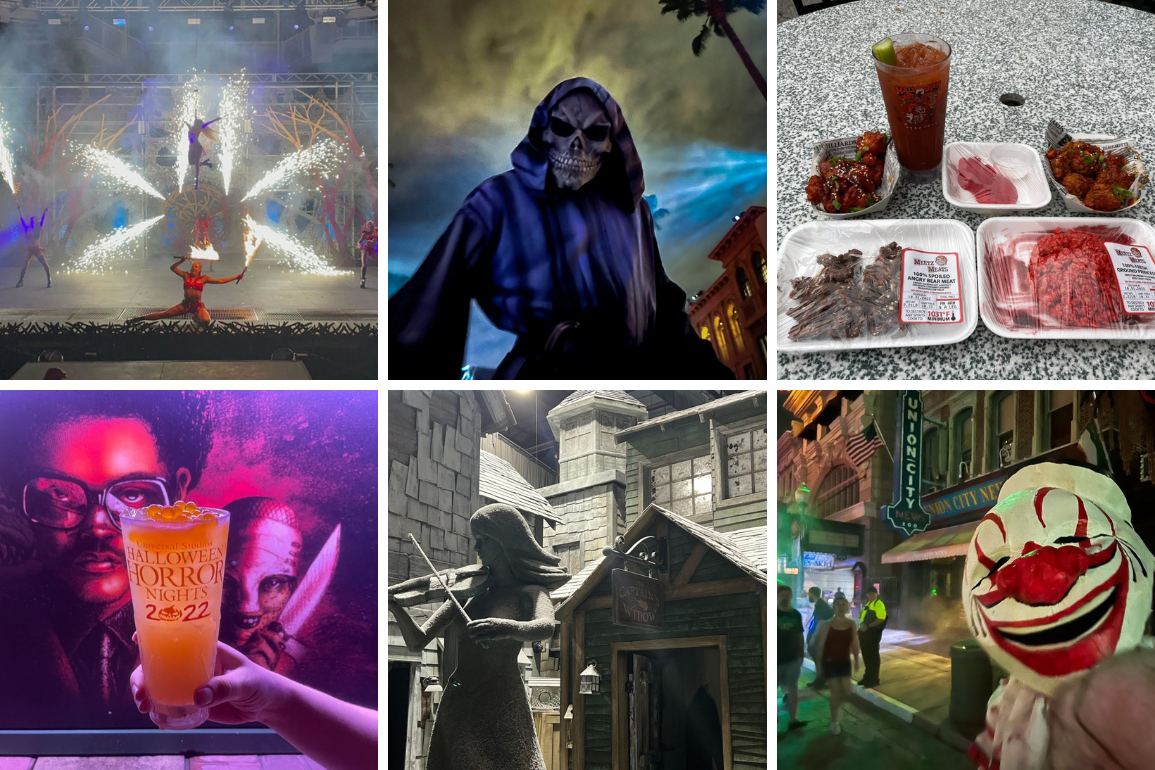 The nation’s premier Halloween event has risen from the dead and returned full force for the 2022 season at Universal Orlando. Halloween Horror Nights 31 is well underway at Universal Studios Florida, and we’ve got your full guide to the event. From ticket and tour details to full reviews on houses and scare zones, this is your ultimate guide to HHN 31.

The event runs from September 2 through October 31, 2021, on select nights. This year, for the first time, the event is open until 2:00a.m. every night.

Tickets are available online and at the gate, but we recommend buying tickets ahead of time as most event nights have been selling out.

Single-night tickets start at $73.99. Annual Passholders are eligible for discounts.

Single-night express starts at $109.99 or can be added to multi-night tickets as seen above.

R.I.P. Tours give you a tour guide and direct access to houses and shows. The tour includes the following:

Unmasking the Horror: Behind the Screams Tours

There is a 3-house tour and a 6-house tour. The house lineup is not guaranteed but barring any unforeseen circumstances, the lineups are as follows:

The Weeknd: After Hours Nightmare house is not included in either tour.

Stay and Scream areas allow Annual Passholders or daytime guests to remain in designated locations inside the park after closing and have access to line up for houses before the event starts for the night. If you don’t have regular daytime admission, you can purchase a Scream Early ticket for $35, which grants you admission to Universal Studios Florida from 3:00p.m. until 5:00p.m., at which time you will enter a Stay and Scream area.

Signs will direct guests towards different Stay and Scream areas around Universal Studios Florida. Team Members will scan your valid Halloween Horror Nights ticket and allow you to enter the waiting area prior to the start of the event.

Guests staying at Universal Orlando Resort Hotels have an exclusive entrance to Halloween Horror Nights. We recommend taking advantage of this as the lines to enter the event can be very long. You’ll find signs directing you to the entrance, which is located by the former Blue Man Group building.

You will need to have your valid room key in order to use this entrance.

If you thought one Universal Monster was scary, how about three? Better summon your scream squad, ‘cause you’re about to get caught in the middle of an epic battle between The Wolf Man, Dracula, and The Mummy, together for the first time ever. Their mission: To find the amulet that will break their curse. And they’ll destroy anyone who gets in their way.

Prepare to enter the macabre mind of The Weeknd in this haunted house as he stalks your squad through the surreal nightmare of his After Hours music. A slasher carving a smile at an otherworldly rave. Bandaged maniacs performing extreme plastic surgery. A grotesque mannequin masquerade. His nightmare is now yours.

Step inside a new double-feature of Blumhouse horror. Your scream squad will find yourselves trapped between a frantic teen and the ruthless serial killer she’s swapped bodies within “Freaky.” Then, you’ll try to make a desperate escape from the dark basement of The Grabber before you become his latest victim in the terrifying “The Black Phone.”

Gather your friends and visit Haddonfield, Illinois, where Michael Myers is about to don his mask and embark on his first brutal spree. Silent. Merciless. Relentless. He’s the embodiment of pure evil. You don’t want to go alone as you go back to where it all began. This year, step into the original 1978 horror classic, “Halloween.”

The show is loosely themed to a horror record with a follow-along picture book. Much of the show’s soundtrack was designed specifically for Ghoulish!, including the covers of recognizable songs.

UPDATE: At this time, Ghoulish! A Halloween Tale has been indefinitely canceled due to damages from Hurricane Ian.

On the first All Hallow’s Eve, an evil sorceress called forth monstrosities from dark dimensions. Now your blood will fuel them.

On All Hallow’s Eve, a dark storm descends upon a cemetery and awakens long-dead spirits. No one living can escape them.

At an abandoned farm, scarecrows have risen from the crust of the earth to hunt you and seek revenge. They’ll harvest your screams.

The sweets from Major Sweets’ candy company have turned children into crazed killers. This Halloween’s all trick, no treat, and total mayhem.

The Pumpkin Lord, the spirit of Halloween, has taken over this year’s event, summoning hordes of fiendish creatures. Terror has taken root.

Experience more personal, up-close interactions with Michael Myers, Kharis the Mummy, and more with the Scareactor Dining Experience during Halloween Horror Nights 2022. This add-on is $54.99 per person and includes food and Scareactor photo opportunities at Louie’s Italian Restaurant in Universal Studios Florida.

For Halloween Horror Nights 31, the Red Coconut Club at CityWalk has undergone a terrifying transformation into the Dead Coconut Club featuring the Universal Monsters.

The Weeknd: After Hours Nightmare Bar

The Tribute Store offers a bakery case full of various spooky snacks. We sampled a selection.

Check out a full photo and video tour of the HHN 31 Tribute Store here.