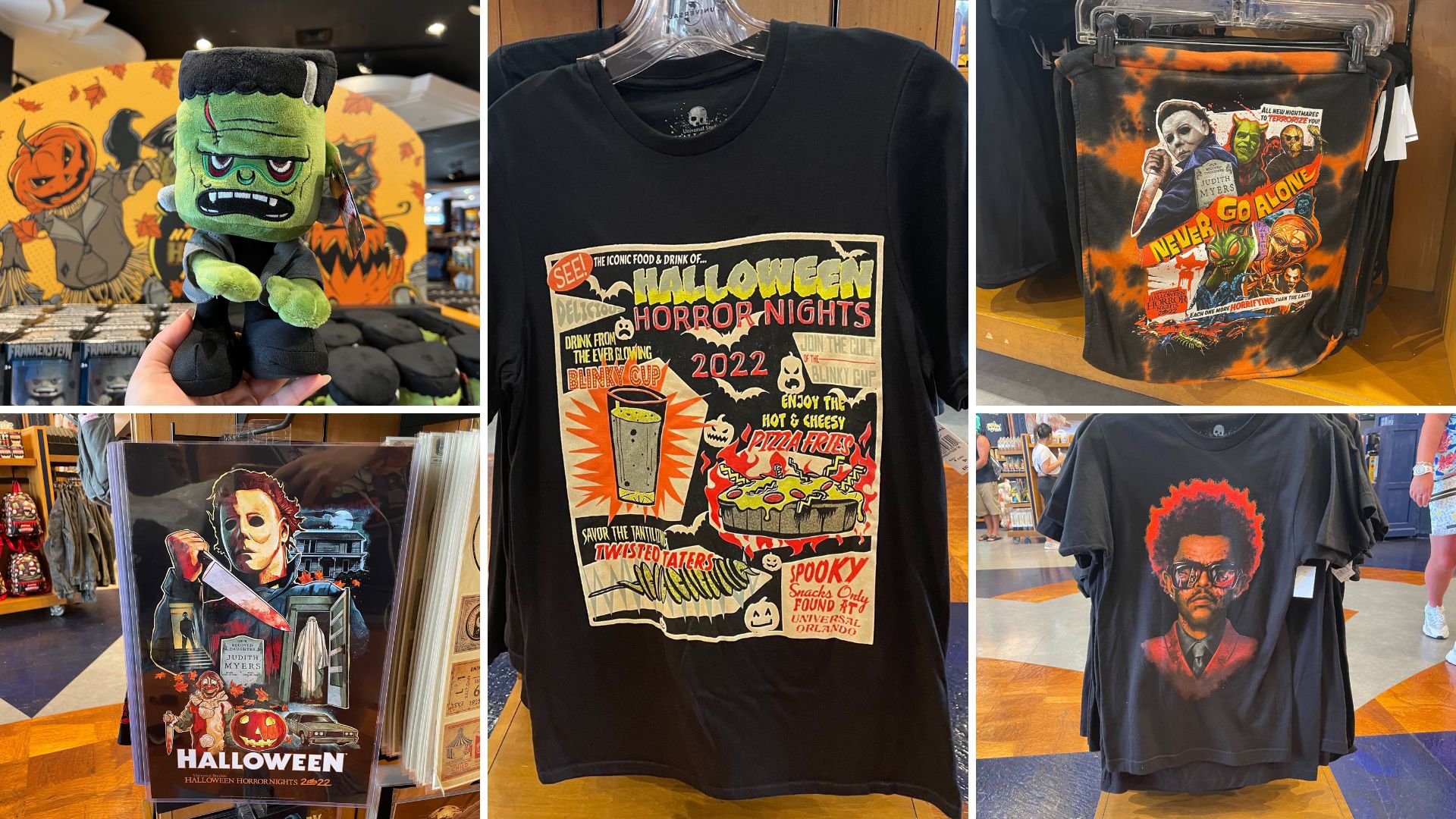 The pumpkin lord is looming over an orange and green version of the UOAP logo. A jack-o’-lantern replaces the “o” of “UOAP.”

The Pumpkin Lord holds a jack-o’-lantern on this magnet, with the UOAP logo in one corner.

The orange and green UOAP logo is on the left sleeve.

The same image is on this black drawstring backpack.

The Pumpkin Lord is featured on this scented candle, which presumably smells of pumpkin.

This cup is inspired by the Universal Monsters: Legends Collide house, which features the three monsters together for the first time.

The cup can be used for refills at Coca-Cola Freestyle machines throughout Universal Orlando Resort.

This poster features a skeletal grim reaper pointing at a gravestone listing all of this year’s haunted houses.

This poster features imagery from each house, including Michael Myers, The Grabber, and the three Universal Monsters. “Never Go Alone” is across the center and a banner at the bottom reads, “Each one more HORRIFYING than the last!”

“Universal Studios Halloween Horror Nights” is on both sides and it appears as though blood is dripping from the top.

This phone case features classic Halloween images of ghosts, a jack-o’-lantern, a skeleton, a black cat, and a witch flying among bats. A calendar indicates “Everyday is October 31st.”

This phone case is similar to the one above, but the classic characters are all grouped into the number 31. It also reads “Everyday is Halloween.”

The grim reaper looms over a Halloween Horror Nights tombstone on this phone case.

A skull, witch, cat, jack-o’-lantern, and crescent moon are patterned among “Halloween Horror Nights” and “Oct. 31st” on this phone case.

This phone case features Anubis towering over the Mummy, Wolfman, and Dracula.

This watch band matches the phone case with the all-over pattern of Halloween images.

You can hang the grim reaper on your wall thanks to this wooden sign. The hooded skeleton is holding onto the Halloween Horror Nights gravestone.

This 50″ by 60″ blanket features the Studio Screamers images.

Each side has a different pattern. One features large images of each Studio Screamers character, while the other side has them in a denser all-over pattern.

Each of these coasters features one of the three Legends Collide monsters.

The decals in this set have a retro feel, resembling signs, tickets, and playing cards.

One reads “Legendary Truth The Collective.”

Another resembles a sign for Shady Oaks Cemetery in Willamette Valley.

There are multiple carnival-themed decals and a bloody ace of spades card.

One decal is a ticket for “Phantom of the Opera” at Universal Palace Theater.

This black T-shirt features some of the food available from booths at Halloween Horror Nights this year.

This includes the Twisted Taters and pizza fries.

“Universal Studios Halloween Horror Nights 2022” is in red on the left sleeve.

The Weeknd: After Hours Nightmare Tee – $30

The Weeknd himself is on the front of this shirt.

Blood is splattered across his face.

His sunglasses feature some ominous images.

“After Hours Nightmare” is on the back.

This drawstring backpack has a cloudy orange and black background.

The design is the same “Never Go Alone” design featured on one of the posters above.

If you want to easily carry a drink with you during Halloween Horror Nights, pick up this black and orange cupholder bag.

It features a spooky jack-o’-lantern face on each side.

You can also get the monster as a colorful plush.