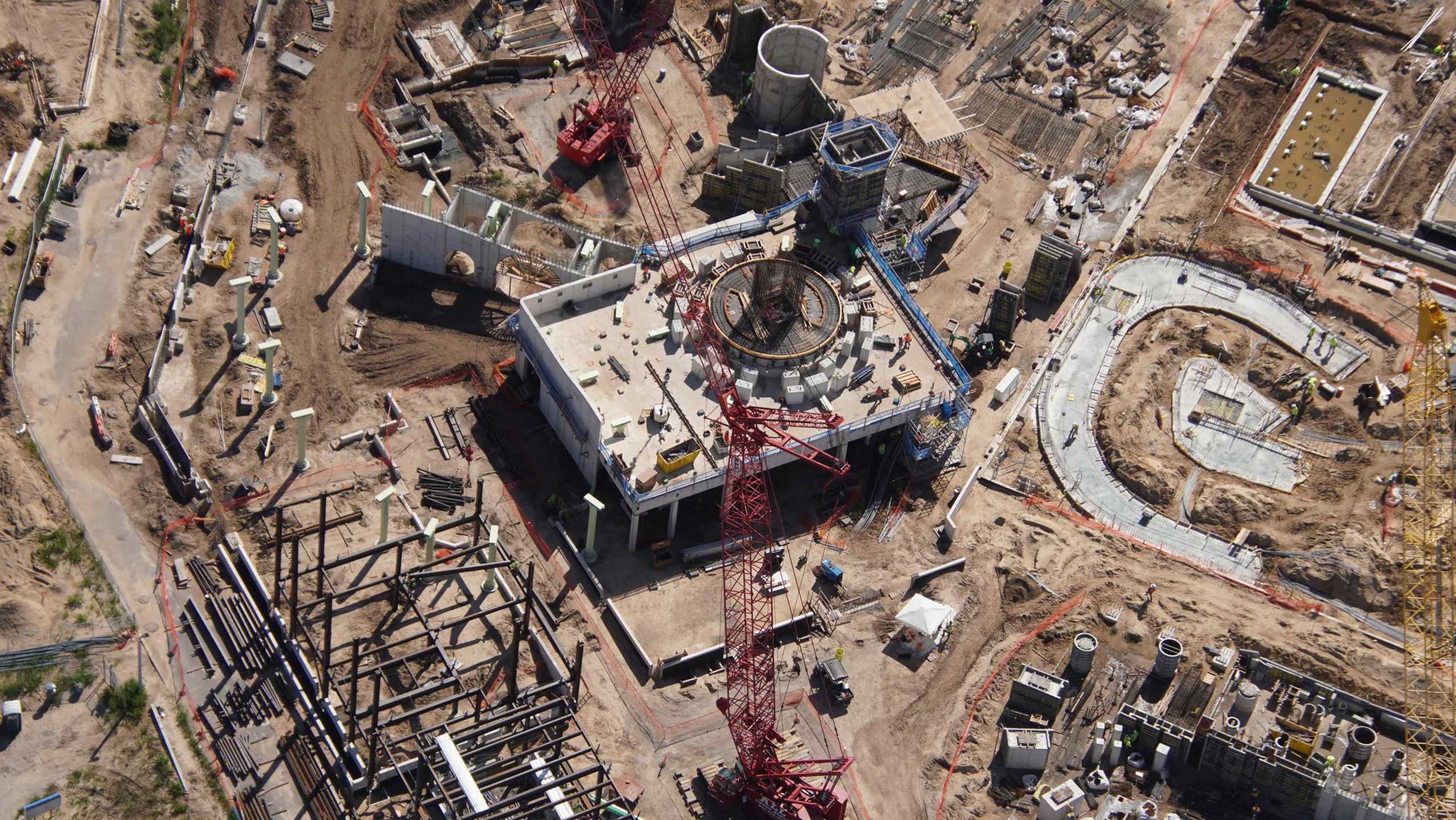 Work is progressing steadily on the site of Universal’s Epic Universe, and thanks to @bioreconstruct on Twitter, we can see the progress being made on the new theme park.

The piece of track in the image above will be the future home of the Mario Kart attraction, while the building for Yoshi’s Adventure has already gone vertical, as seen in the upper left corner. Meanwhile, the dirt paths towards the bottom will be the home of the Donkey Kong ride.

The Yoshi’s Adventure building has moved along steadily, with track supports already onsite. They can be seen to the left of the building in the above picture.

Above, we can get a better look at how the Mario Kart ride is coming along.

The track seems to be taking shape for Mario Kart, though there’s still lots left to do. The lone paved part represents the Rainbow Road scene towards the end of the attraction.

A massive crane is onsite to help with construction.

Next to the park, track for various attractions is staged. Above, you can see the green track of Yoshi’s Adventure.

In nearby lots, more track has arrived.

Heading towards the hub of the park, a base has been constructed for what will likely be a gigantic carousel, as seen in the park’s concept art:

A slalom has been excavated to access the lowest part of the site, while still mesh has been staged nearby, awaiting concrete.

Not far away, the ground seems prepared to start building the in-park hotel. An arrow points to the restaurant that’s expected to be located in front.

Above, we can see a straight-down shot of the Classic Monsters land.

The building of the centerpiece attraction of the land has already gone vertical. It seems walls are already up that will lead to the entrance, likely as some sort of castle or manor.

Work is moving quickly, as the building is already being enclosed. The yellow and arrows above point to concrete pieces that will soon be covered up, while the purple arrow notes a floor edge.

Moving across from that, the pathway seems to be in the process of being built for what will likely be a roller coaster.

Here, we can see the restaurant as it will face the Classic Monsters Land.

Much of the land for the parking lot seems prepped. An arrow indicates the likely position of the toll plaza.

The arrow above indicates where the park entrance will be located.

Backstage, much of the Team Member building is already vertical.

Meanwhile, walls are up on what will likely be a warehouse.

Eventually, this framework will be covered in concrete to become a wall.

The Wizarding World of Harry Potter

The Ministry of Magic attraction has much of its framework vertical, though little has been enclosed yet.

An excavator is parked next to what seems to look like a crude courtyard.

In another backstage area, weathering testing is underway to determine what materials to use.

Painting is being done towards the left side, while an arrow indicates the location of four ice machines.

How to Train Your Dragon

Concrete pouring is underway in the How to Train Your Dragon land, with footers for what will likely be a roller coaster in the concrete.

Above, the arrows indicate more footers around the land.

Additional footers are already in place for what’s expected to be a two-track, high-speed racing coaster.

Above, we can see how close the two coasters will be to each other.

Overall, while things still look rough, progress is definitely being made to bring this park to life when it opens in 2025.