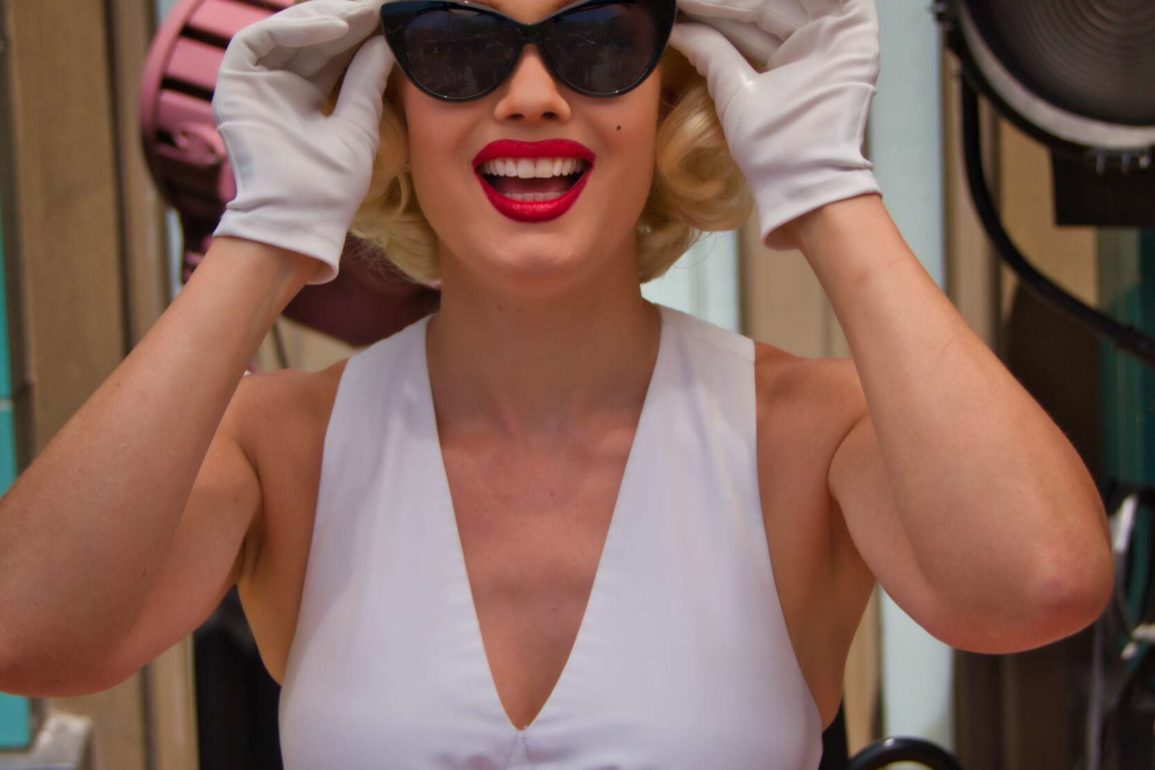 Construction continues on Toothsome Chocolate Emporium and Savory Feast Kitchen. A large trench has been dug out front, and the inside of the building is all but gutted.

The Universal Studio Store has received a new wrap for the upcoming “Minions: The Rise of Gru,” which is due in theaters on July 1.

Marilyn Monroe herself was on-hand to welcome us to the park. It sure was hot out, but she looked as cool as ever.

“The Horrors of Blumhouse” has been announced as one of the mazes for Halloween Horror Nights 2022, and with that announcement came a new shirt. This is the most recent shirt in the line of house-announcement shirts that has already featured Universal Monsters and Halloween.

We found some more of the Universal Retro Films Collection, including these socks cleverly disguised as a VHS, and the bucket hat seen below.

In the new merchandise, we also found this adorable Jaws mug.

We may have spent far too long taking photos of that cute little shark face.

There was a ton of Minion merch today. This Loungefly bag features Otto, the newest Minion.

There was a large Minion collection of merchandise available today, including this light-up spinner and the pin set below, among other things. Follow the link to check out everything we found.

This Minion tumbler has to be one of our favorite pieces from the new collection.

The most popular item we saw being carried around by guests all over the park is this new Minion car popcorn bucket. It has real working wheels, so we drove it on out of there.

As we were walking past the Despicable Me: Minion Mayhem attraction, we noticed something flying overhead with a familiar shade of yellow.

It’s an aircraft-towed banner ad for the new film. Is that Minion on a nude beach? With chest hair?

The line at Minion Café was far too long, so we opted to just finish our popcorn instead.

Buying a Minion car popcorn bucket in a shop instead of the popcorn stand gets you a ticket redeemable for your first fill free. We wanted to keep our bucket car clean, so we opted to get it in the popcorn cup. We have seen this new design being slowly rolled out at Universal Studios Hollywood, and we were glad to get our hands on one to see all the cool art.

Checking in on Super Nintendo World, we see some more theming has been added.

And from another angle, we can see that the first row of spinning coins has been added over the colorful blocks.

Out in front of the Studio Store, Lower Lot, it appears that a new popcorn stand will be debuting soon.

We really want to cool off on this hot day, but rather than suffering the ridiculous wait times for Jurassic World – The Ride, we opted for the Studio Tour.

While on the tram, we noticed a big project being built out by Falls Lake. We couldn’t see too well over the fences, so we got a better view from the parking structure at the end of our day.

This is the town of Jupiter’s Claim, an old-Western-style tourist attraction that can be seen in the trailers for the upcoming film “Nope,” written and directed by Jordan Peele.

We really hope this is for Halloween Horror Nights. It’s very elaborate for a zone or maze, but that would mean we’d get to walk around down there soon.

From our vantage point, we also saw this big guy sitting in Falls Lake, likely a promotional balloon for the Minions movie.

Our Martini Shot of the day is from that same rooftop vantage point as we see the sun just beginning to head toward the western horizon. Up here, away from the crowds and the cluster of heat in breeze-less walkways, it looks so beautiful.