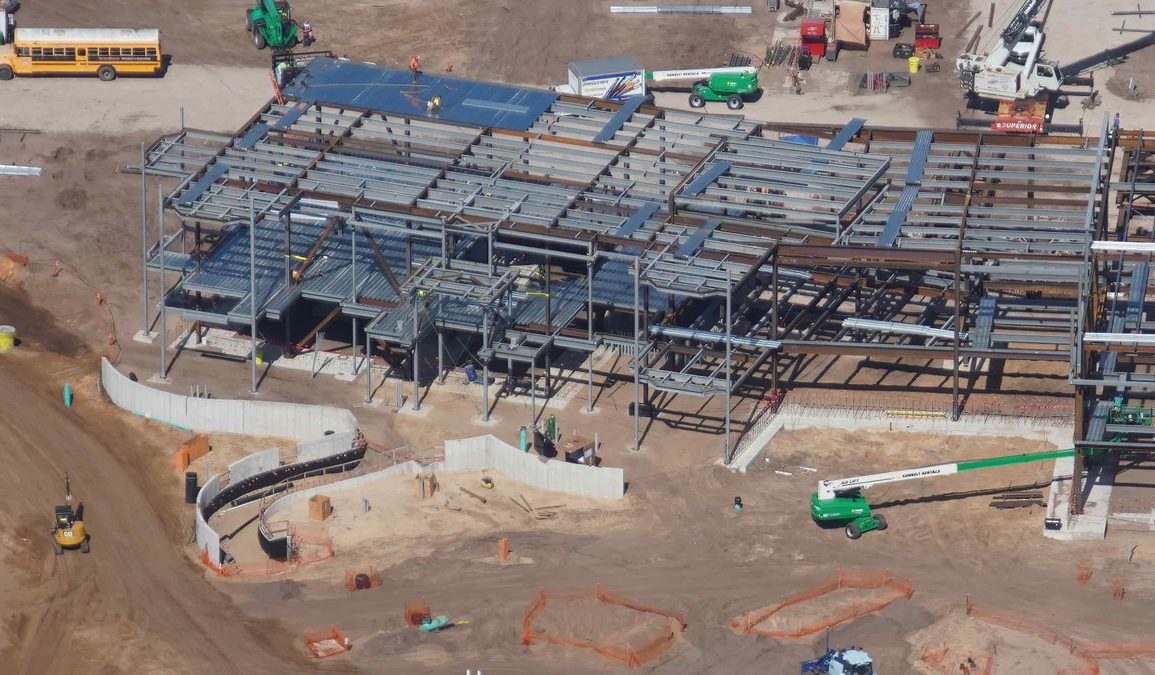 The rumored lands for Epic Universe are Super Nintendo World, a Classic Monsters land, a third Wizarding World of Harry Potter, and a “How to Train Your Dragon” land.

The Wizarding World of Harry Potter

The Ministry of Magic is being constructed in The Wizarding World of Harry Potter. Right now, it is mostly a framework, but there is some paneling on the top.

There are multiple cranes around the structure. As bioreconstruct points out, the yellow crane seems to be lowering steel into a large open area of the building.

Here’s a look at the structure from the side.

How To Train Your Dragon

The “How to Train Your Dragon” land will have a roller coaster. The coaster will dip in and out of the land, including through a concrete trough to the right of the photo above.

Supports for the coaster have been installed (some visible in the left corner of the photo above), but there is no coaster track yet.

The concrete trough is yellow on the outside. Supports are visible inside of it. The trough sits in a shallow trench in the ground.

More track supports are in this curved area, where the coaster will take a turn.

A large lake will be at the corner of Epic Universe, next to the in-park hotel. A peninsula cuts more than halfway through the lake, perhaps as a launch site for fireworks.

The white circle at the center of the park will eventually have a fountain, directly in front of the hotel.

An attraction thought to be a carousel will be next to the fountain.

There will also be a small pond here.

The four lands branch out from the fountain.

Construction is underway on a structure next to the fountain and the Classic Monsters land.

It doesn’t seem to be part of the land.

The main attraction of the Classic Monsters land is thought to be a mansion. In the photo above, bioreconstruct labels the entrance, atrium, tree location, and possible two ride routes.

Like the Ministry of Magic, this building is still mostly just a framework.

There are two concrete bases in the building, pointing to the two possible ride routes.

Of course, work is also underway in the backstage areas of Epic Universe. Above is the Team Member parking lot and concrete base of a warehouse, next to Sand Lake Road.

A Team Member building is under construction behind the Ministry of Magic building.

Walls with windows and doors have been erected, but no roofs yet.