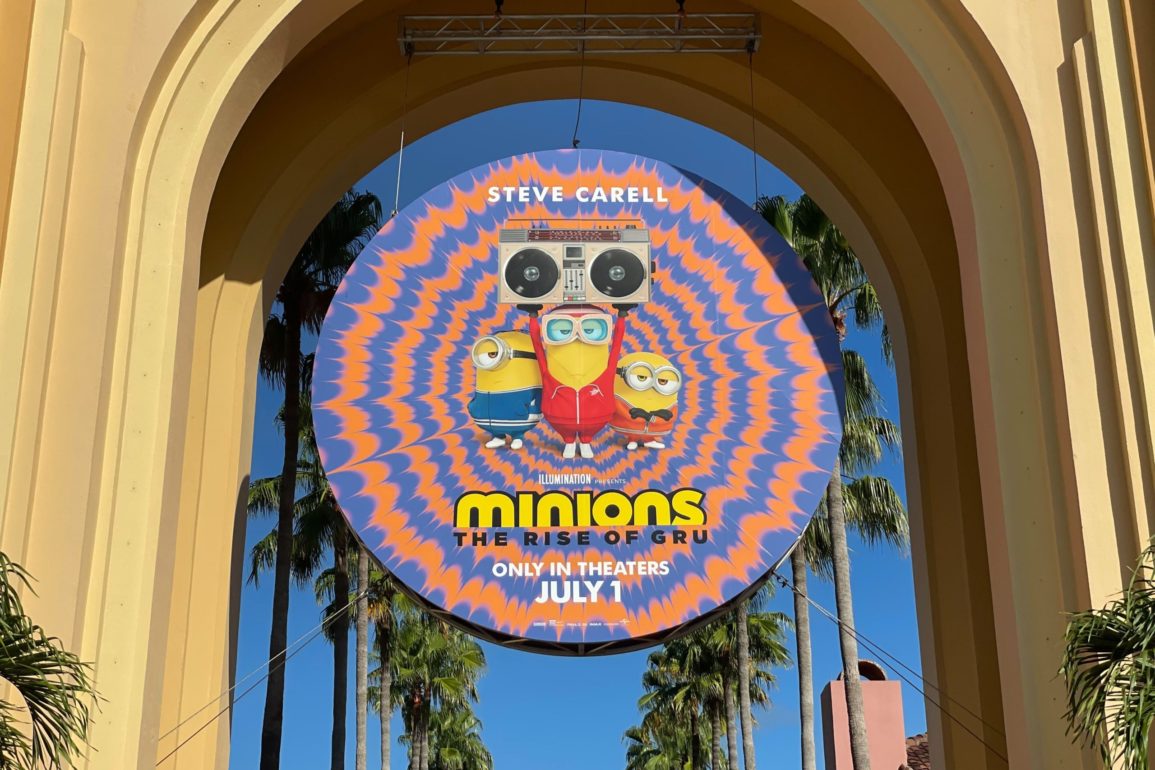 To promote the release of “Minions: The Rise of Gru” on July 1, Universal Studios Florida has new decorations, photo ops, and a dance party at the exit of Despicable Me Minion Mayhem.

Guests entering the park will immediately be reminded of the film thanks to a large banner hanging in the archway.

The circular banner features three Minions, one holding up a boom box.

A tie-dye orange and blue pattern is behind them. “Minions: The Rise of Gru” takes place in the 1970s, so the decorations have a ’70s aesthetic.

A photo op/game for the film can be found at the Universal Music Plaza.

The backdrop has a teal and pink tie-dye pattern, and a giant boom box at the top.

Some Minions in tracksuits are on either side of the backdrop.

The game is for two players. The buttons on this grid light up and the players have to hit them.

Unfortunately, the sun was a bit too bright to see the button lights when we stopped by.

Nearby, a black curtain is covering a sign we believe will be for a “Minions: The Rise of Gru” preview.

We could see a glimpse of yellow through the curtains. This is where a sign previously advertised a “Sing 2” preview.

Guests can meet a Minion in front of a tie-dye backdrop in the Hollywood area.

The backdrop has the logo for “Minions: The Rise of Gru” at the top.

Over at Despicable Me Minion Mayhem, a new overlay for the film is at the exit of the attraction.

The screens above the exit change from the steel Gru logo to a full ’70s dance party hosted by the Minions.

One screen showcases different Minions against the psychedelic tie-dye background.

The other screen shows various Minions in ’70s dance outfits amongst the exiting crowd.

Watch a video of the dance party below.