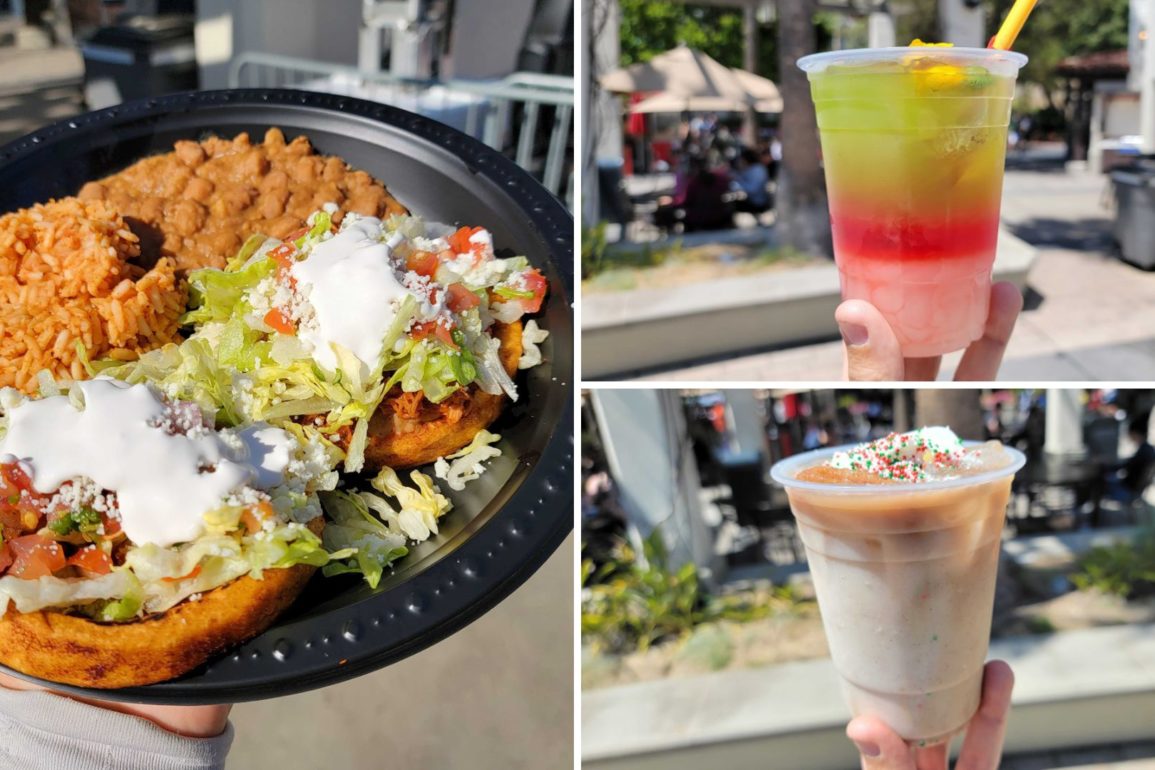 Cocina Mexicana at Universal Studios Hollywood is serving up two new drinks and a sopes dish for summer.

Cocina Mexicana is in the Upper Lot.

It has special non-alcoholic drinks, but we visited for the new cocktails: Fiesta Punch and Spiked Horchata.

Watch our full video review below and keep scrolling for closeups and prices.

This cocktail starts sour and moves to sweet.

When it’s presented to the guest, it’s a layered cocktail with the lime and tequila on top, the fruit punch and grenadine in the middle, and the piña colada on the bottom.

This leads to your first mouthful inevitably being sour tequila only.

Once it’s mixed up using the provided tamarind straw though, it becomes one deep pink, creamy, sweet cocktail that is dangerously easy to drink. None of the flavors overpowered each other once mixed.

It really does remain in balance between the fruit punch, the piña colada, and the tequila. The lime juice is lost a bit once mixed, but its presence can still be felt by the sweetness of the other ingredients never becoming too harsh thanks to the citric bite evening them out.

This is a surprisingly good cocktail, one we would expect to have at an actual Mexican restaurant rather than in a theme park.

This one is just okay. It’s not a great horchata and not a great cocktail. It’s just fine all the way around.

It’s thinner than one would expect for a good horchata and not as spirit-forward as the other cocktail.

This is what one would expect from a theme park cocktail — a little watery, not enough alcohol to be present as a flavor, just cold and sweet. We suggest opting for the Fiesta Punch.

This is not a bad showing from a theme park. These sopes are a little thin for our liking, but that’s not uncommon in many Mexican restaurants. It’s a choice in how to present the dish.

The sopes are griddled and topped with your choice of meat. We opted for carnitas, a pulled pork. The carnitas is stewed with vegetables and spices to impart flavor, and that comes through on the plate.

The meat is then topped with pico de gallo, lettuce, cheese, and sour cream.

Overall it’s not a bad dish, but it’s nothing really stand out. The rice is lackluster, just a vaguely orange rice rather than the expected Spanish-style rice with peppers and spices.

The beans, however, have a complexity of flavor that was surprising.

Combining the beans with the sopes elevates them to a better dish overall, with a creamy, hearty kick that the sopes needed.

Will you be trying either of these cocktails or the sopes? Let us know in the comments.