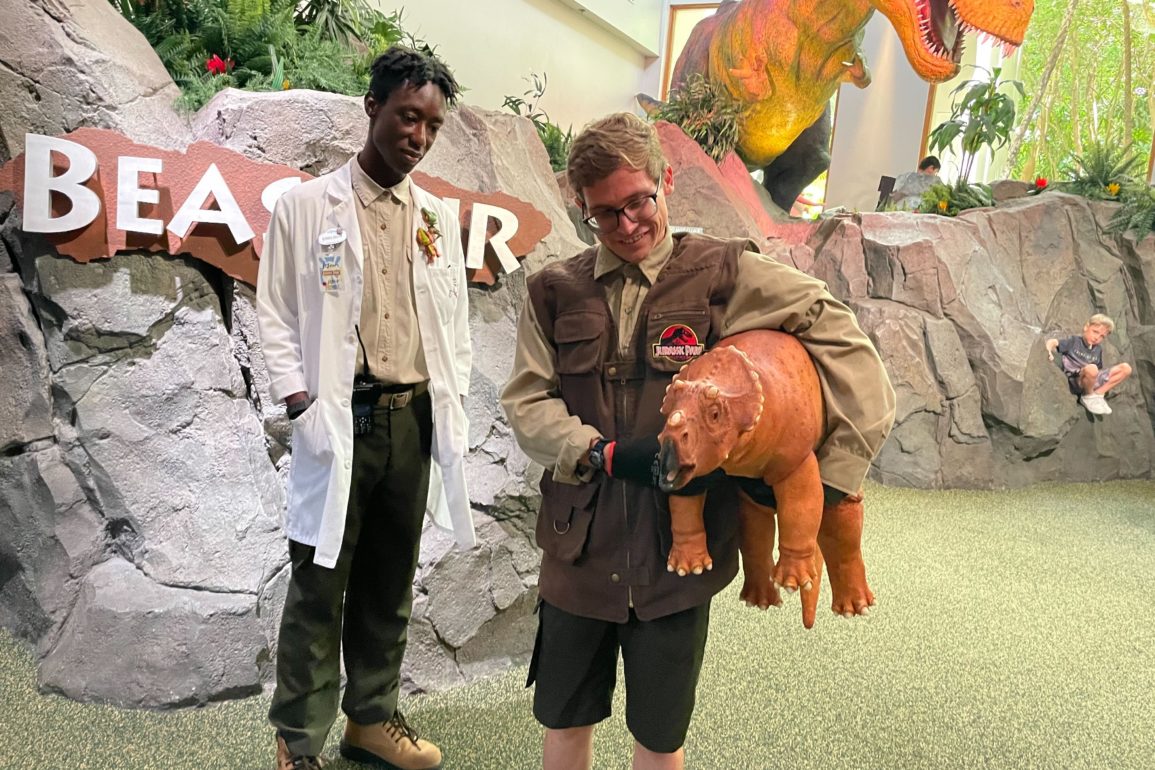 Welcome to another beautiful day here at the Universal Orlando Resort! It’s incredibly hot today and we can see everyone looking for shade and air conditioning. Let’s get going and head over to Islands of Adventure first.

Caro-Seuss-el is looking extremely vibrant with the ugly grey scrims removed. This is exciting and a good indication the ride could be close to reopening. It is really the centerpiece of Seuss Landing when you enter the land, so it’s nice to see it again after so long.

The land really does need a lot of work, including the cracks on the roof of Circus McGurkus and the missing entrance arch. Hopefully when Caro-Seuss-el reopens, we’ll see more of the land getting some much needed maintenance.

Speaking of maintenance, we spotted progress on the If I Ran the Zoo playground. We’re looking forward to this opening this weekend.

With the scrims down around Caro-Seuss-el, it also allows for Sky Trolley’s second track to reopen again soon, reducing the wait time. It’s one of our favorite rides, but the wait time has been high lately due to the construction on Caro-Seuss-el.

The parks do feel busier than last week, but wait times still weren’t too awful. Hagrid’s Magical Creatures Motorbike Adventure was posted at a 90 minute wait.

Just another hot, crowded day in the Wizarding World of Harry Potter. We expect more crowds in the parks now that schools are starting to release kids for the summer.

Time for a Dole Whip! Did you know Universal sells Dole Whip? Personally, we like to get a Dole Whip Float with Sprite in Marvel Super Hero Island, but you can get it from Wimpy’s in Toon Lagoon or Schwab’s Pharmacy at Universal Studios Florida. It’s an inexpensive snack and a great way to cool down.

Nobody wants to be in the sun today. It’s extremely hot, so make sure you stay hydrated!

It’s such a beautiful day, even if it’s really hot and humid.

Did you know there’s a piece of the Berlin Wall on display in CityWalk? It’s behind the Hard Rock Cafe, so if you take the pathway on the side of the building by the gift shop and walk all the way to the back, you’ll find this little piece of history just chilling back there. It’s a fun thing to share with friends while visiting Universal Orlando.

Inside the Universal Legacy Store, we found a new keychain for Back to the Future. It’s $12.

When we arrived at Universal Studios Florida, we noticed the Tribute Store sign is lit! The lights around the sign look good during the day, but we can’t wait to see them after dark.

Summer menus went up at the food trucks, but Battery Park doesn’t have a menu yet, but equipment has been set up in the area. We heard there will be Cuban sandwiches and yucca fries here, but we’ll be sure to share the menu when it gets posted.

Posters have been added to the construction walls surrounded Fievel’s Playland. This area is getting refurbished due to issues with the water slide. Hopefully it won’t take too long, but there is no reopening date listed yet.

Puss in Boots is now a backdrop for photos in the Dreamworks Destination in KidZone.

That’s all for this visit to the Universal Orlando Resort. We’re going to escape the heat inside Cowfish with a nice lunch. You can never go wrong with Burgooshi. Thanks for following us around the parks today and be sure to stay tuned for more updates.