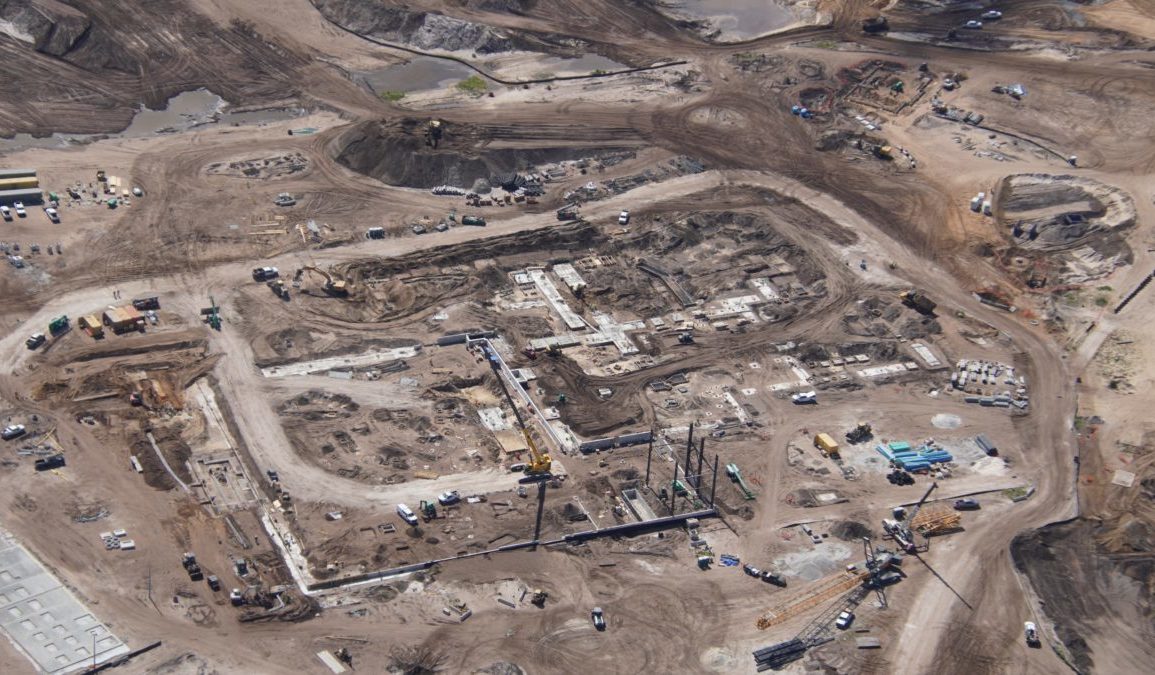 Thanks to Twitter user, @bioreconstruct, we have an aerial view of the current state of construction at Universal Orlando Resort’s newest upcoming theme park, Epic Universe. He detailed through several tweets what each area is, with close-ups on many of them. Please note that all of the potential lands and attractions listed are rumored as nothing has been confirmed so far (other than Super Nintendo World).

In the aerial overview of Universal’s Epic Universe construction, the bottom arrow is roughly at the park entrance, and the center arrow is about the center of the park. The top arrow is at the steel frame recently added for the rumored Ministry of Magic attraction.

Moving to an overview, @bioreconstruct labeled the different areas of the park that are of note in the several images that follow.

A closer look at the steel frame for the rumored Ministry of Magic attraction. A crane sits nearby, and construction vehicles are scattered throughout the site.

Some foundations have also been laid for the shops and buildings in front of the attraction.

Near these recently added construction offices, this arrow indicates the concrete walls of Mario Kart in Super Nintendo World. The black coating is waterproofing, indicating the walls will be buried on this side. Nearby vehicles lend scale to the wall height.

The same little arrow designates the waterproofed walls from the above photo, putting it in larger context of the land. The top center area will be Donkey Kong, with the bottom right being Yoshi’s Adventure.

Another view of the same area, with Donkey Kong in the upper left and Yoshi’s Adventure in the bottom right. The embankment in the center is notated by the left arrow, and the right arrow indicates more black waterproofing that will be buried.

Spinning around to the other side, Donkey Kong will be at the right where the yellow crane is, Yoshi’s Adventure at the center and left yellow cranes, and Mario Kart at the red crane.

A closer look at the Mario Kart site. The two cement trucks notated with arrows at the left are poised to deliver their concrete to a pour at the right arrow.

And a closer look at Yoshi’s Adventure in the center top of the frame. At the bottom, a concrete slab is prepped for pouring for the Donkey Kong area, and at the right, a concrete pour is in progress for Mario Kart.

And finally, a close-up on Donkey Kong. The grey area is prepped for a new concrete pour, and the white area is being outfitted with utility conduit.

The concept art has shown a large, elaborately themed carousel building by a pond in this location.

How to Train Your Dragon Land

An aerial overview of the How To Train Your Dragon land.

Though not much building progress has been made in this area, some retaining walls have been installed.

This view from a further angle helps to show the depths of the excavation as the dewatering is ongoing. The arrow shows where just the top of a dewatering pump can be seen, blocked by the scarp in front of it.

When the park is all done, it will look something like this. While this is just concept art, it suggests the placement of lands and attractions.

Are you excited to see Universal’s Epic Universe when it opens in 2025? Let us know in the comments below.

Previous
Guide to Early Park Admission at the Universal Orlando Resort: Tips and Tricks to Make the Most of the Morning