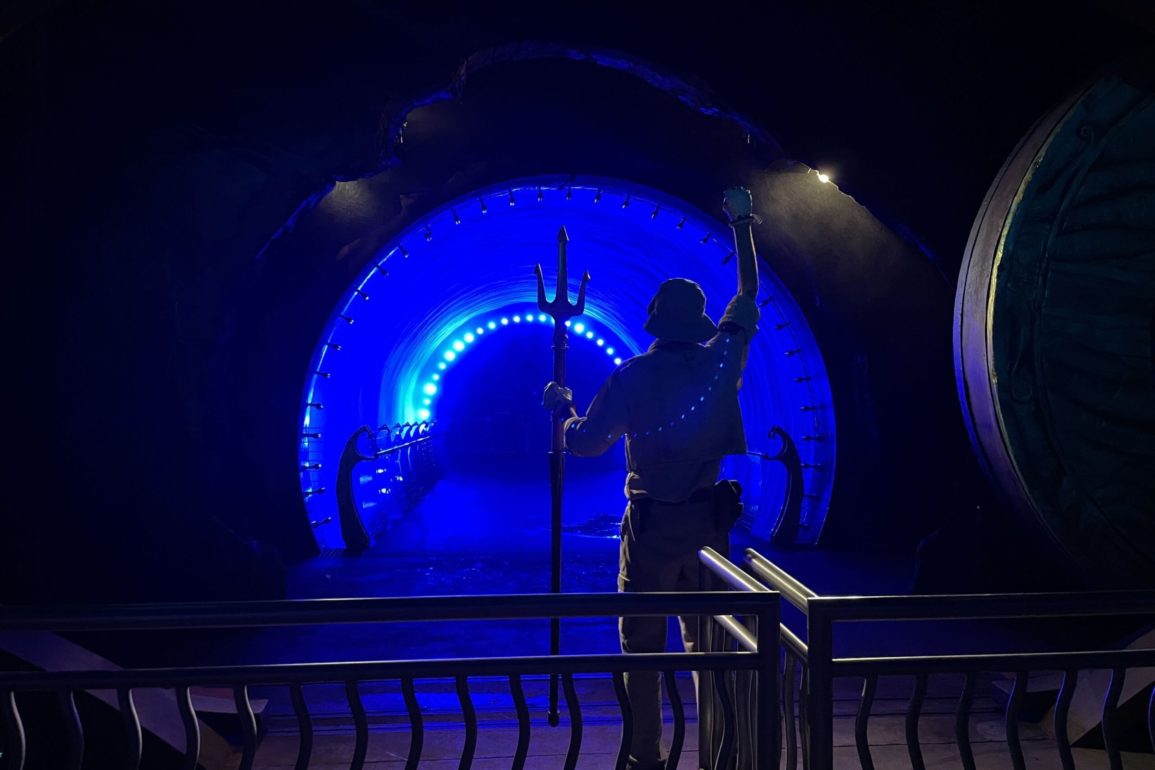 After temporarily closing in August 2020, Poseidon’s Fury has finally reopened at Universal’s Islands of Adventure. We’ve been watching as the attraction’s façade was refurbished, but now it’s time to join Taylor on an adventure inside the ruined Temple of Poseidon once again.

Construction walls were down when we arrived at The Lost Continent this morning.

The front of the ruins feature pieces of what was once a great statue of Poseidon.

Guests enter through the ruins.

The show begins in a chamber where guests meet archaeological assistant Taylor.

Taylor explains that this room was a ceremonial chamber of Poseidon until it was sealed up by his high priest Lord Darkenon, killing everyone inside as a sacrifice to the Dark One.

Taylor uncovers a spooky inscription on the wall and then receives a message from Professor Baxter. Before Taylor can evacuate guests, a secret door opens, and the voice of Lord Darkenon beckons the group forward.

Taylor and guests then venture through a treasure chamber, and Darkenon continues to taunt them. The doors mysteriously close, shutting everyone inside.

Taylor accidentally picks up Poseidon’s trident and summons a goddess, the guardian of the temple.

The goddess opens a water tunnel leading deeper into the temple.

This tunnel has real water moving around the walkway, so yes, you may get wet.

The next room is an underwater chamber. The voice of Poseidon speaks to Taylor, asking for the trident.

Darkenon arrives, and the room is plunged into darkness.

When light returns, guests find themselves in a huge cavern.

A battle ensues between Lord Darkenon and Poseidon.

Nothing about the story changed during the refurbishment, but the effects looked like they were refurbished — the lasers were bright and crisp, and the images projected on the water were clear. Everything looked bright and new.

Watch our full video of Poseidon’s Fury below.