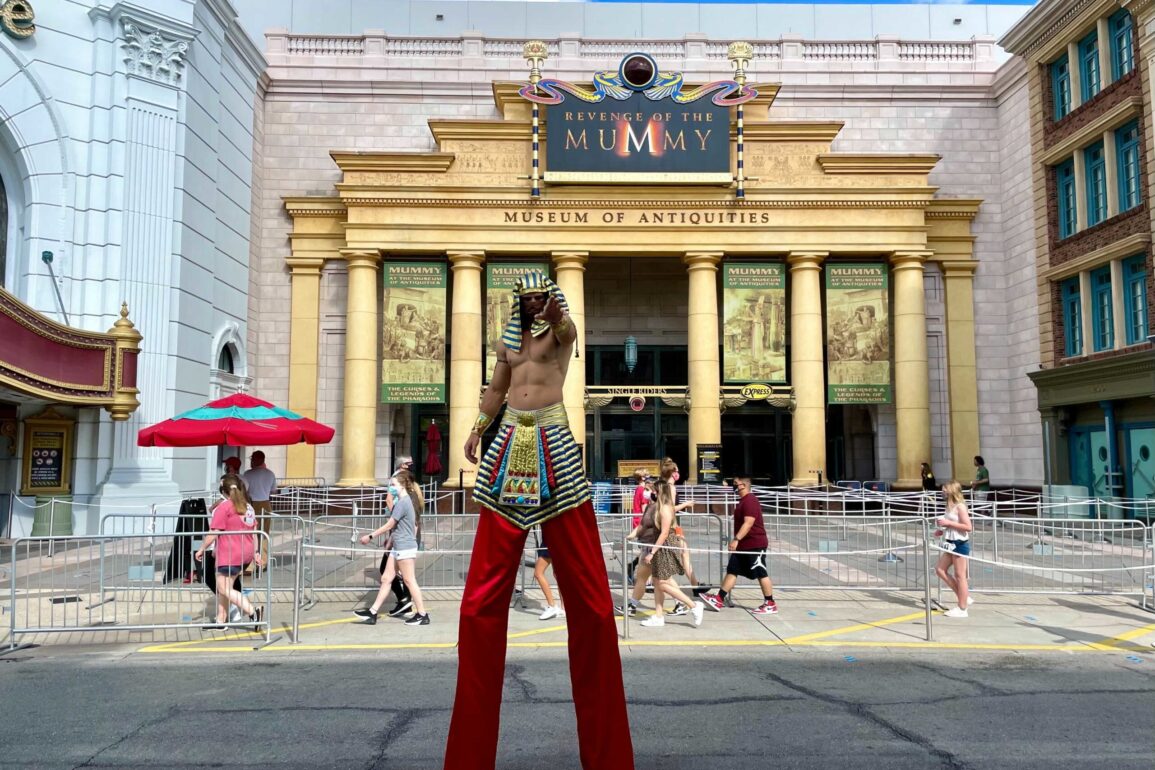 PHOTOS, VIDEO: Tour the Full Queue and Pre-Show Video for Revenge of the Mummy at Universal Studios Florida

Revenge of the Mummy closed on January 7 at Universal Studios Florida for a lengthy refurbishment set to conclude sometime around late summer 2022. And with whispers about the changes that could come to the attraction’s queue and preshow, we figured we’d take a full journey through the queue to check out every single detail!

Are you insane? Get out of here! The curse is real. This whole place is a trap. He’s after your souls!

Revenge of the Mummy is located in the New York area of Universal Studios Florida.

The entrance of the attraction is designed to look like the Museum of Antiquities, with giant pillars and banners that draw you in.

Once you enter the building, you’ll feel like you walked right onto a movie set. You’ll notice backdrops suspended from the ceiling and two large stone doors that were used in the films. “Hot Set” signs, red lights, and notes for the extras are posted around the walls and help to immerse you into the storyline. Since you’re now an extra on the movie set, you’ll wanna pay attention to the signs, too. Modern items like backpacks must be stowed in the lockers outside.

Guests will be able to watch the pre-show on multiple screens throughout the first few areas of the queue.

There’s a caged off area with a bulletin board full of notes. Let’s take a closer look at some of the details from this board of production notices.

If you pay attention to the pre-show film playing in the queue, you’ll notice a lot of details on the board. No Med-Jai, no service. The Med-Jai protects the actors and crew on this cursed set, so you’ll notice several mentions of amulets and necklaces.

Reggie, the assistant production assistant, struggles to get Brendan his coffee throughout the pre-show video. Unfortunately, Reggie goes missing on his quest to get Brendan’s coffee, so you’ll also see a missing poster and a job opening posted on this board.

Don’t be left in the dust!

More notes for the production crew can be found in the next part of the queue.

Two mannequins and film-used wardrobe pieces can be found behind a small caged area in the queue. These are authentic items from the film, so they are kept behind the fence.

Remove all modern eyeglasses! (This is 1930’s Egypt people!)

Molds that were actually used for the actors in the film are also displayed behind a small fence.

Props from the film can be seen behind another fence as you make your way deeper into the tomb.

Turning the corner and seeing the beautiful hieroglyphics on the walls is fantastic. This queue is also interactive, so you can have a little fun while you wait in line.

A sign next to this chest reads, “Hieros on Chest Roughly Translate: Evil By One Hand, Protection By Two”, which encourages guests to put their palm on the chest.

If you and another person touch the chest at the same time, the Med-Jai symbol will light up in red in the ceiling above the chest. Another nearby interactive element allows you to blast guests in a different room with air by touching a scarab beetle.

This way to the tomb.

This small room is covered in beautiful artwork from floor to ceiling.

You might see what looks like the Key of Hamunaptra floating in an opening in the wall. Reach for it and not only will you get blasted with a shot of air, but you’ll cause the lanterns in the tomb to go out and flicker. Twice as much fun!

Death is only the beginning.

Making your way through the queue, you might spot a familiar “face” hidden in the artwork.

Revenge of the Mummy replaced the original Kongfrontation attraction in this area, so you might just be able to see Kong’s face hidden in this artwork. Fun fact: Kongfrontation track still exists within this building, too!

Could that tiny mummy be a reference to our friend Reggie’s fate?

You’ll later encounter Reggie and Imhotep at the start of the ride.

You’ll climb stairs to reach the load platform and you’ll see a giant statue of Anubis suspended from the ceiling.

Brendan, still suffering the curse of caffeine addiction, is impatiently waiting for Reggie to return with his latte when a [ghostly swoosh] finally hands him his coffee. This attraction is full of memorable quotes, but the final scene with Brendan is a fan-favorite.

A missing poster, advertisement for the Wrap Party, and more notes for the crew can be found as you exit the attraction. Next stop is the Sahara Traders gift shop where you can purchase your on-ride photo or other mummy-inspired merchandise.

The curse is real, but never fear! Revenge of the Mummy will reopen later this summer. For now, construction walls and posters surrounded the attraction entrance.