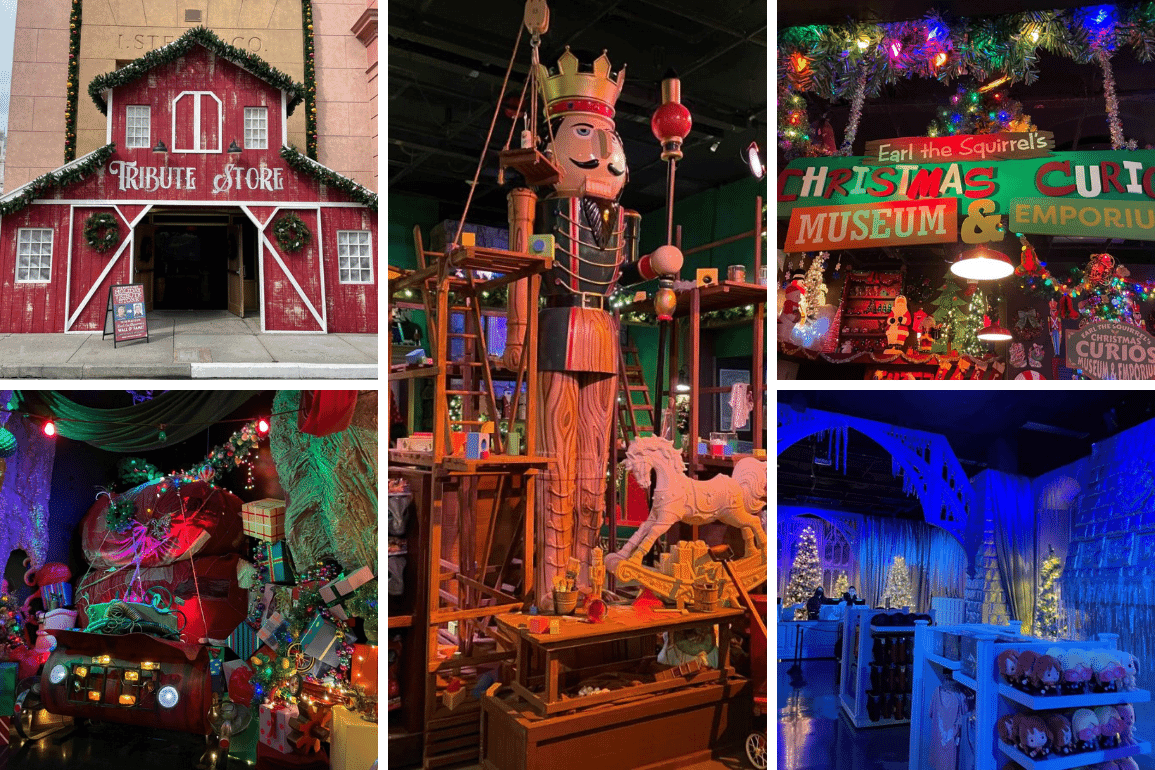 The 2021 Holiday Tribute Store has opened a day early at Universal Studios Florida. Join us for a full photo and video walkthrough tour!

This year’s tribute store features four themed rooms. We enter through a barn façade into what appears to be Santa’s office.

Santa is preparing for the big day. An empty glass of milk sits beside a reindeer harness, complete with jingle bells and a Pre-Flight Checklist for the Head Elf.

Earl the Squirrel has apparently branched out into the Reindeer Food industry, as Earlsbrand feed is seen here.

A map of the world shows off Santa’s flight plan.

A note at the bottom of the map shows Santa has advanced technologically, and any areas not marked on the map will have gifts delivered via drone.

Doors to the sides of the entry hall are labeled “Reindeer Stables” and “Reindeer Training.” These are Team Member-only doors.

Photos of the “Elf of the Year” line the wall just inside.

Around the corner, we enter the first room: Santa’s Workshop. A larger-than-life Nutcracker figure takes center stage, surrounded by tiny scaffolding, ladders, and paint buckets as the Elves work hard to finish the job.

Gifts in varying states of completion are around the room, from toys mid-carving to fully wrapped presents.

The store is full of Easter Eggs, such as this wooden DeLorean from “Back to the Future.”

Carved figures of E.T. in his spaceship can also be spotted.

A framed portrait of Santa himself hangs over the mantle.

A workshop schedule for the Elves is posted.

A book titled “Being Your Best sELF” is on the shelf.

Blocks on the top shelf spell out “Tribute.”

It’s hard to capture on camera with the garland in the way, but the train is pushing a small model DeLorean, in reference to “Back to the Future III.”

He’s made his list and checked it twice. Now, you, too, can know who is naughty or nice.

A change-up this year is that the treats sold at the Tribute Store are now in the second room rather than the fourth. There are also noticeably fewer options.

Posters along the walls when you enter Earl’s advertise the “World Famous 5 Foot Squirrel,” “The World Famous 80M Acorn (Under Refurbishment), and “freshly stacked” jars of cake (which you will find in the bakery case.)

The other side advertises a World Famous 5.5 foot Christmas tree “coming soon” and more confections.

The bakery case and counter are in the corner of the room.

Many baked confections are available, including cake jars, whoopie pies, and more. Fresh roasted nuts are for sale on the counter nearby.

Earl has advertisements all around the room.

Earl the Squirrel has a squirrel-themed tree.

The medallions feature the Grinch, Earl himself, a festive Universal Studios Florida logo, and the Tribute Store façade.

To get to the rest of the Tribute Store, we have to cut through the employee area of Earl’s. Guests can pay to have caricatures featured on the hallway walls as employees of Earl’s tree farm.

An employee noticeboard has advisories about benefits, training paperwork, and more.

Employee lockers can be seen next to what we suspect is that giant Christmas tree Earl is working on.

After a poster for beautiful Mt. Crumpit National Park, we head through a door to the Whoville Sanitation Department.

The Grinch has decorated for the holiday, complete with a large photo of Max in his reindeer costume.

Another wax mold machine is here, this time with a Christmas tree.

The Grinch’s sleigh, packed full, is parked inside.

Leaving the Grinch’s Lair, we head into the Great Hall at Hogwarts Castle, which is decorated for the Yule Ball.

Icicles hang from practically every surface. You can find all of your “Harry Potter” needs here.

A large frozen fireplace has the Hogwarts crest and each of the House crests set into the stone.

Watch our full walkthrough tour of the 2021 Holiday Tribute Store below.