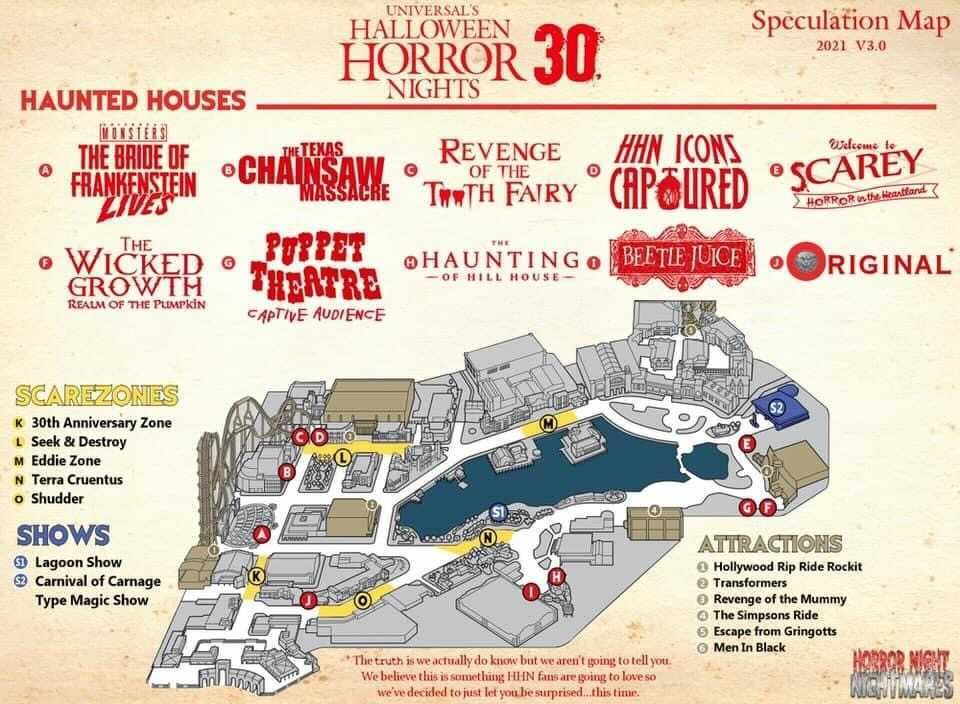 It seems like for the last few years, it just wouldn’t be HHN without some last-minute lineup changes. The last time we brought you the speculation map from HHNightmares on Twitter, it looked a little different. Let’s take a look at the new predictions.

The Bride of Frankenstein Lives

The return of the Bride is confirmed! In a dual announcement with The Texas Chainsaw Massacre (see below), Universal announced that The Bride of Frankenstein Lives will be back for another year. This house is still expected to be at location “A,” with the queue entrance near the Universal Music Plaza. This is the same location as last year as presumably the house was never taken down.

Also confirmed! According to the map, the entrance to the Texas Chainsaw Massacre will be located in front of Race Through New York Starring Jimmy Fallon. This is far from the first appearance from the franchise. It most recently made an appearance in 2016.

Revenge of the Tooth Fairy

What happens when a child says no to the tooth fairy? While yet unconfirmed, Revenge of the Tooth Fairy is another house that opened in 2020 and is likely to return again this year. The entrance should be in the same location near the New York Public Library facade.

We might not have gotten a full event last year, but we certainly saw a lot of merchandise featuring the HHN Icons of previous seasons. The entrance to this house would be located next to Revenge of the Tooth Fairy, near the Tribute Store. It seems likely this will be the confirmed Jack the Clown house, but details are unclear at this time.

Welcome to Scarey: Horror in the Heartland

While not officially confirmed, the façade for this house is visible from the queue for Men in Black: Alien Attack. This matches the location on the speculation map for Welcome to Scarey: Horror in the Heartland.

The Wicked Growth: Realm of the Pumpkin

At the very back of the park, next to MIB Gear (the gift shop exit for Men in Black: Alien Attack), we might find an original house: The Wicked Growth: Realm of the Pumpkin.

Puppet Theatre: Captive Audience was confirmed last year for the 2021 season and was the first official house announced for HHN 30. According to the map, the entrance would be next to The Wicked Growth: Realm of the Pumpkin at the back of the park.

The Haunting of Hill House

Confirmed! You’ll likely find the “Haunting of Hill House” entrance located in Woody Woodpecker’s KidZone. This house is based on the Netflix series of the same name.

It’s showtime! Again! We’ve already gotten a preview of the new Beetlejuice merchandise for HHN 30, and a few lucky guests (including ourselves) were able to experience this house last year when it opened for just 3 days. Fans of Beetlejuice are even more excited now that it has been confirmed as returning for 2021. You can read our review of the house here.

The final house was speculated to be either Creepshow or Halloween III, but both of those ideas seem to have been scrapped. HHNightmares claims to know the details of this original house, and much fan speculation indicates it will be related to Legendary Truth. Legendary Truth is a bit of HHN lore involving The Collective, people who investigate the evil within the event. It hasn’t made an appearance since 2015 (the 25th anniversary year) and would be fitting to return for the 30th.

According to the map, the first scare zone you’ll come across in Production Central will be a 30th Anniversary Zone.

Through the streets of New York near Revenge of the Mummy, there could be an original scare zone, but there aren’t many details.

The scare zone Terra Cruentus would take over the pathway in front of the Media Center, between Hollywood and Woody Woodpecker’s KidZone. Terra Cruentus is the fictional land ruled by the Terra Queen, the Icon of HHN15.

This rumored zone in the Hollywood area would likely be based on properties from the horror streaming network Shudder.

Eddie is best known as Jack the Clown’s brother and a would-be Icon who never got to star in his own event. He’s been seen in houses such as “Run: Hostile Territory” and several anniversary houses. The rumored zone devoted to Eddie Schmidt is located in the San Francisco area on the speculation map.

Not much is known about the possible Seek and Destroy scare zone other than its possible location in the streets of New York.

A show is rumored to return to the lagoon, much like the fan-favorite Marathon of Mayhem from 2019’s event.

A magic show in the style of 2015’s Carnival of Carnage starring Jack the Clown is rumored to be held in the Fear Factor Theater. (Sorry to break the news to anyone else who was hoping for a Wyld Stallyns reunion tour.)

Let us know in the comments what you’re most excited about for Halloween Horror Nights 30!