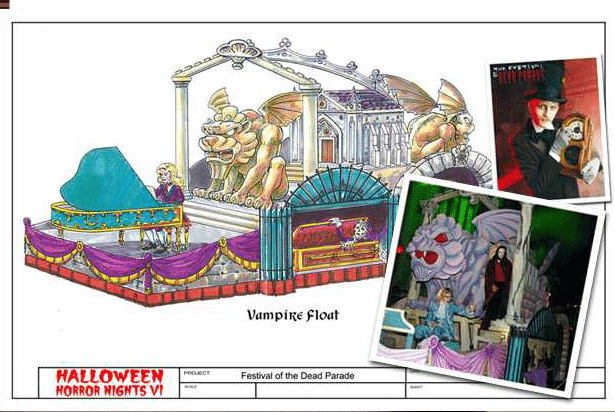 30 Years of Fear – A History of Universal Orlando’s Halloween Horror Nights: 1996 (The Cryptkeeper Returns With a Parade, Beetlejuice Disappears, and More)

Welcome back to 30 Years of Fear – A History of Halloween Horror Nights. Is anyone else craving Twisted Taters? We’re less than 50 days from opening night, and the hype is real. Today, we’re going to take a look at 1996’s Halloween Horror Nights VI, which saw the return of the Cryptkeeper and the debut of the first parade to stroll the streets.

The event expanded to a record 15 nights, with tickets seeing another $1.50 average increase. This was the first year that the event continued past Halloween, with the final night on November 2.

The Cryptkeeper’s Studio Tour of Terror

The Cryptkeeper returns! Although not an Icon this year, he certainly had a starring role in the event. As suggested with the above photo of the façade and name, the house took place at a film studio, spanning both backlot and soundstage. Appropriately for its location in the queue of Earthquake: The Big One, the premise of the house was that an earthquake had rattled the studio, resulting in the animation of monsters from toxic fumes.

Guests who journeyed through Toy Hell: Nightmare in the Scream Factory were treated to sights like the larger-than-life monstrous bear pictured above.

A sample of the treatment (the document detailing the elements of a house, including a scene description, special effects, music, actors, and costuming/make-up) describes the horrors that lay within “The Cobbling Room”:

“In one corner, a horrified HALLOWEEN HORROR NIGHTS GUEST lies strapped to a vertical chopping block, a DEMONIC CLOWN in the process of hacking off one of his legs.

As the clown amputated his victim’s leg, a strobe light momentarily blinds us, sending us stumbling into the heart of the cobbling room. Simultaneously, a bloody, shrieking THING bursts out of the corpse on the wall, thrashing violently and sending us reeling toward … a MEAT GRINDER.”

A new take on 1995’s maze, Universal’s New House of Horrors still showcased the Classic Monsters alongside “Reel Life Monsters.” Below you can see concept art and a photo from a room based on Lizzie Borden, who allegedly killed her father and stepmother with an ax (though she was acquitted, the rumors never stopped).

A promotional image printed in Florida Today advertising the house features Frankenstein, the Bride of Frankenstein, and two matching children.

Bill and Ted have been kidnapped, but fear not! Mulder and Scully are on the case. Our heroes join forces with The Terminator, Ethan Hunt (“Mission: Impossible”), and James Bond to face off against The Cigarette Smoking Man, Boba Fett, evil Terminator (The T-1000 Cop), and Catwoman. After the heroes rescue Bill and Ted from the clutches of evil, everyone unites along with KISS for a musical finale.

An ad recruiting performers gives us insight into the various pop culture cameos featured in this year’s Bill and Ted’s Excellent Halloween Adventure. These are confirmed thanks to a show synopsis put together by BillandTed.org.

The Cryptkeeper’s Festival of the Dead Parade

After the inaugural Mardi Gras event turned out to be a smash hit, Universal decided to extend the concept into Halloween Horror Nights and added a parade. The Festival of the Dead Parade was helmed by the Cryptkeeper, along with five floats and 75 Team Members (including the ever-popular stilt walkers). The parade reused a float from that year’s Mardi Gras and also threw Halloween-themed beads to guests.

Below, you can see concept art side-by-side with photos of the real thing for three of the floats in the parade.

Tricks, Treats, and Trances was a seemingly last-minute replacement for The Price is Fright. It did not appear in any of the advertising or lists of attractions published in newspapers. It was a Hypnotist show in the amphitheater that hosts Animal Actors on Location.

Midway of the Bizarre

Midway of the Bizarre returned to Amity Island as the only scare zone for 1996. Reportedly, the zone was essentially the same as the previous year.

Honorable Mention: The Price is Fright

The Price is Fright, a macabre game show starring Beetlejuice, was set to return to Halloween Horror Nights VI.

The Price is Fright was advertised in newspapers countrywide for the event, and Beetlejuice even gave an exclusive interview to the Orlando Sentinel (pictured above). For whatever reason, the show was pulled last minute and replaced.

We’ll see you next time when we take a look at Halloween Horror Nights VII: Frightmares.

For more Halloween Horror Nights history, check out the rest of the series below.