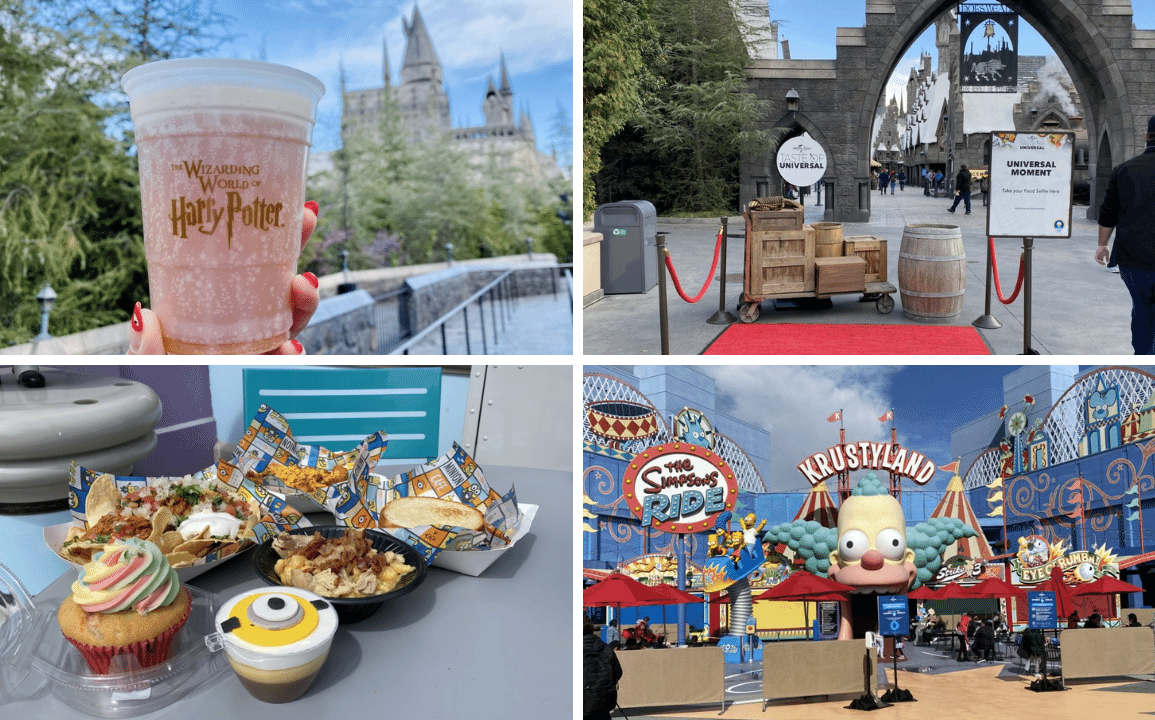 Universal Studios Hollywood has partially reopened for the ticketed “Taste of Universal” shopping and dining event. The event is taking place on select Fridays, Saturdays, and Sundays from 12:00 PM to 7:00 PM. We were there for the event’s opening today, March 12.

Parking is free for the event, but preferred parking is available for $10. Entering through Universal CityWalk Hollywood, we received our temperature check.

Indoor dining is not currently permitted in Los Angeles County (although it is starting on Monday). Health and safety signage can be seen throughout CityWalk and Universal Studios Hollywood.

Official event information for Taste of Universal describes “an outdoor feast of great food and tasty beverages plus photo ops and shopping offers.” Tickets include a choice of five menu items from an extensive menu of appetizers, entrees, beverages, and desserts. Food from the lands of Springfield, U.S.A. and The Wizarding World of Harry Potter are available, as well as Hollywood and Dine and the all-new Minion Cafe.

There was a physically distanced line to go through security before entering Universal Studios Hollywood.

Thankfully, it wasn’t too long of a wait even though only a couple metal detectors were open.

We love seeing the globe and the red carpet again!

The gates were decorated with a Taste of Universal sign.

Surprisingly, there were low crowds all morning. Parking was a breeze, there was close to no wait for temperature checks and security, and there was only a small line to get into the park. While we see hour-long waits at other entertainment offerings in Southern California, it was odd to see the opening of this event start off so quietly.

At the turnstiles, we received our food voucher.

Each guest receives a different card. We got lucky with the Studio Tram Tour!

The voucher has the numbers 1 through 5 to check off with each menu item we get.

Part of the entrance is blocked off with while the fountain is refurbished.

Signs throughout remind guests how to wear their face coverings.

As promised, there were photo-ops throughout. Of course, the entire park is arguably a photo-op.

The Ford Anglia from Harry Potter and the Chamber of Secrets can be found at the top of the street.

One of the official photo-ops is with this car from The Mummy.

A red carpet and film props have been rolled out.

There were physical distancing markers next to this cab from Blue Collar.

The Hello Kitty store was open, but you have to enter through the front of the Studio Store. Universal has streamlined one-way entry and exit ways through all of the shops.

The rest of the doors are blocked off by gates.

Starbucks was open for anyone needing their caffeine fix.

The facade for The Secret Life of Pets: Off the Leash looks amazing! While this attraction hasn’t opened yet, you can probably look forward to it sometime during 2021.

A new Secret Life of Pets store, The Pets Store, also was open to the public today. It opened briefly last March.

The new Minion Cafe had its grand opening.

We decided to try some items from the new menu. You can read our full review here.

Super Nintendo World has started to take shape! We were able to catch a glimpse of the current construction from the inside of the park.

It was quite visible that there was a lot of maintenance being done during the closure. All the effects, sounds, and interactive gags were fully functioning. It looked like a lot of the area got a fresh coat of paint as well.

Krusty Burger was one of the more popular dining locations today. The pathways felt empty most of the day because guests were either waiting in line for food or seated eating food.

The Simpsons Ride area had seating available in front.

While the lower lot still remains closed, you can make your way down the first escalator for some great views and photo opportunities. Universal did a fantastic job of utilizing their space and letting guests get the most out of the park that they could offer.

It’s so nice to finally see this view again!

While walking back up the escalators into Springfield, we stopped across the walkway to check out the Universal Studio Tram Tour.

The daily shooting schedule had been updated with the current studio production list and park offerings.

The Studio Tour’s queue was accessible to guests for another scenic photo opportunity.

From here you’re able to see the backside of Hogwarts.

While only this small area is open, it’s nice to have the extra space to explore.

As we made our way over to Hogsmeade, we caught caricature artists setting up their stations. This is a wonderful offering for guests who want something to do between food tabs. While we didn’t catch any characters out today due to the rain, they were periodically out for pictures in specific areas.

Time for a little bit of magic in Hogsmeade.

A “Universal moment” photo opportunity was placed to the left of the land’s entrance.

Physical distancing markers could be found along the outdoor queues for the food carts and restaurants.

Ollivanders was open to guests with reduced capacity.

As we mentioned previously about Springfield, all interactive and visual effects are now working in the park, including interactive wand opportunities.

Three Broomsticks was a popular dining location most of the day but calmed down around 5 PM.

Social distancing practices and markers were also utilized inside the restaurant.

We tried a few items off the menu: the Fish and Chips, Sticky Toffee Bread Pudding, Corn, and Shepherd’s Pie.

It wouldn’t be a trip to the Wizarding World of Harry Potter without a butterbeer! The drink is available for $8.00, or for one use of your food and beverage tab.

As it got later in the day, the park started to empty out even more than it already was.

Pathways were empty by 6 PM. If Universal offered nighttime entertainment at the event, guests would probably stay later. However, there isn’t much to do after you finish your tabs.

With so many stores being open inside the park, there was never a wait to enter any shops. Sadly, there is no event-specific merchandise to purchase.

We circled through the park one more time at night to check out the lighting and to take in the last moments of the event.

With ticket prices ranging between $44-$54 for this event depending on the day, it does feel like a justified price with five included food and beverage vouchers. There are fun entertainment options such as photo opportunities and distanced character meet and greets, as well as access to most of the areas of the park. The park is in beautiful shape with lots of energy. It felt great to be back!

This event is a wonderful option for anyone looking to get their theme park fix at a reasonable price, while being in a safe environment.

Stay tuned to Universal Parks News Today for even more coverage of Universal Studios Hollywood in the future.

Previous
PHOTOS, VIDEO: Tour “The Pets Store”, Part of NEW The Secret Life of Pets – Off The Leash Area at Universal Studios Hollywood