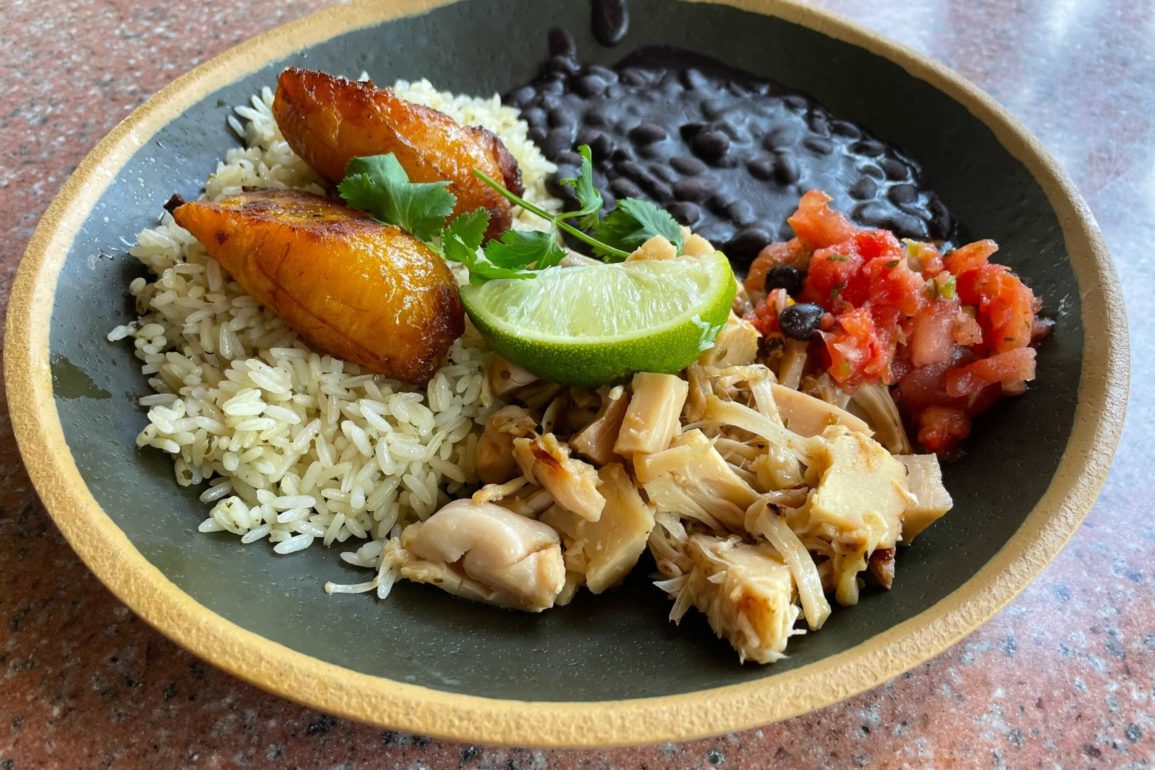 Whether you’re on a plant-based diet or want a break from typical theme park fare, Thunder Falls Terrace is cooking up a dish featuring jackfruit. We went to the barbecue restaurant to see if this dish is a tasty, healthier alternative to the burgers and corn dogs around the parks.

Though the restaurant is known at the theme park for its barbecue ribs, rotisserie chicken, and turkey legs, the jackfruit sounds like a delicious healthy alternative. We’re big fans of the jackfruit options around the parks, such as the Barbecue Sandwich at Monsters Cafe and the Jerk Jackfruit from the Bahamas Tasting Booth during Mardi Gras, so let’s dig in!

For the rice bowl, you can order it with either mojo chicken or jackfruit. We chose the jackfruit option.

Though the dish is described as served with “cotija cheese,” the jackfruit choice comes without the cheese, making for a true plant-based meal. It also comes with a few packets of hot sauce on the side, which adds a little extra flavor to the dish.

Everything on this plate, from the rice, to the salsa, to the jackfruit, looks fresh and inviting. The vibrancy of the colors come well into play!

The jackfruit doesn’t have too much flavor to it, unlike the sauce-covered versions we mentioned before, so you may want to add that hot sauce and squeeze that lime generously on top. However, the texture is excellent and pairs well with the salsa, rice, and beans.

The plantains are a beautiful golden brown — you just know they’re going to be good!

And, yep! The plantains were probably the best part of this dish as they were perfectly cooked and delicious.

Though this isn’t the most filling meal, it is satisfying, and won’t weigh you down like a massive burger from Burger Digs. If you’re looking for a healthier option, or you or someone in your party is plant-based, this is a great place to dine. Even if you’re just looking to be adventurous and try something new, we would definitely recommend this Jack fruit rice bowl — and you can’t beat dining in a Jurassic Park-themed restaurant!

Thunder Falls Terrace is located in Jurassic Park at Universal’s Islands of Adventure.

Will you be trying this dish? Let us know your thoughts in the comments!

Read some of our other food reviews from Universal Orlando Resort: