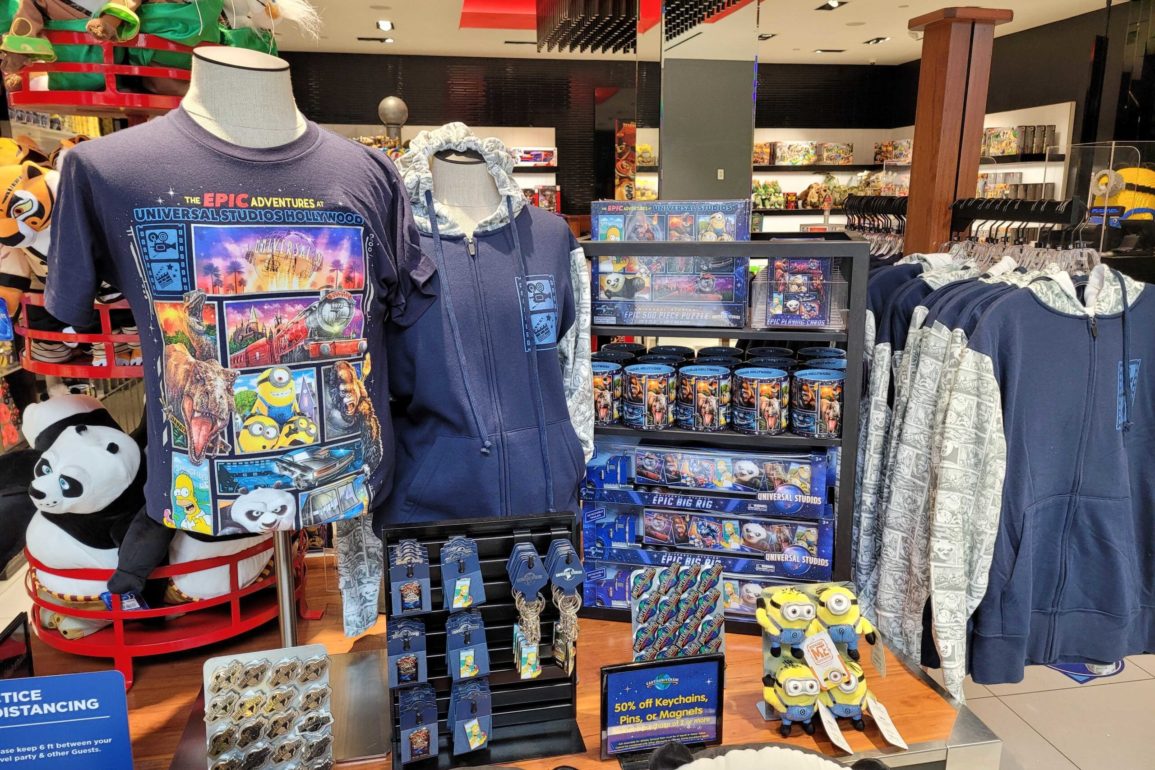 The Cartooniversal Toy Shop has opened at the Universal CityWalk in Hollywood, replacing GUESS. Now that the store is open, we got to take a look inside the shop and see a lot of brand new Universal Studios Hollywood merchandise.

The store welcomes you with a grey brick design on the front entrance walls.

Inside of the store there are a ton of cool items to look at!

An entire section of the store is dedicated to plush!

There is also a section for toys, with Lego sets and plastic dinosaurs.

Candy is available too!

There are large Lego Minions behind the check out stand!

The new store is also selling a new collection of Universal Studios Hollywood merchandise. There are a lot of new options available for purchase, let’s take a look!

This navy blue tee features the main Universal Studios design that blankets all of the new merchandise. The top of the shirt says “The Epic Adventures At Universal Studios Hollywood” and the bottom says “To Be Continued…” outlined in blue.

There is no design on the back of the tee.

The toy truck has photos from all of some of the most popular attractions and movies at Universal Studios Hollywood including Kung Fu Panda, The Simpsons, Harry Potter and more! The cab of the truck is blue.

The shirt says “The Epic Adventures at Universal Studios Hollywood” on the top, and “To Be Continued…” on the bottom, like the navy blue adult variation. This tee has similar photos on the design as the truck toy does.

This mug has the same photos as the other new pieces of merchandise, with a navy blue background accented with stars.

The upper lip of the inside of the mug says “Universal Studios Hollywood”.

This 500 piece puzzle is 26″ by 16.6″ when completed, and says “The Epic Adventures At Universal Studios” on the top. The puzzle has a star background with film silhouettes.

Also available with this new merchandise line is a pack of playing cards!

Keep your pressed coins safe in this new collection album!

This navy blue jacket has a film design on the front, with a movie camera and clapperboard on the front. The sleeves are white and grey with various comic-style drawings highlighting different intellectual properties from the park.

The back of the jacket has the same design as the rest of the collection.

This navy blue tumbler matches the rest of the new merchandise.

The lid is clear.

The bottom of the mug is a stainless steel.

This 5″ by 7″ photo frame lets you display your favorite memories from your day(s) in the park!

This lanyard has a clear sleeve at the end to keep park tickets and valuables safe.

Do you like the look of the new Cartooniversal Toy Shop? What about the new Universal Studios Hollywood merchandise collection? Let us know your thoughts in the comments below.