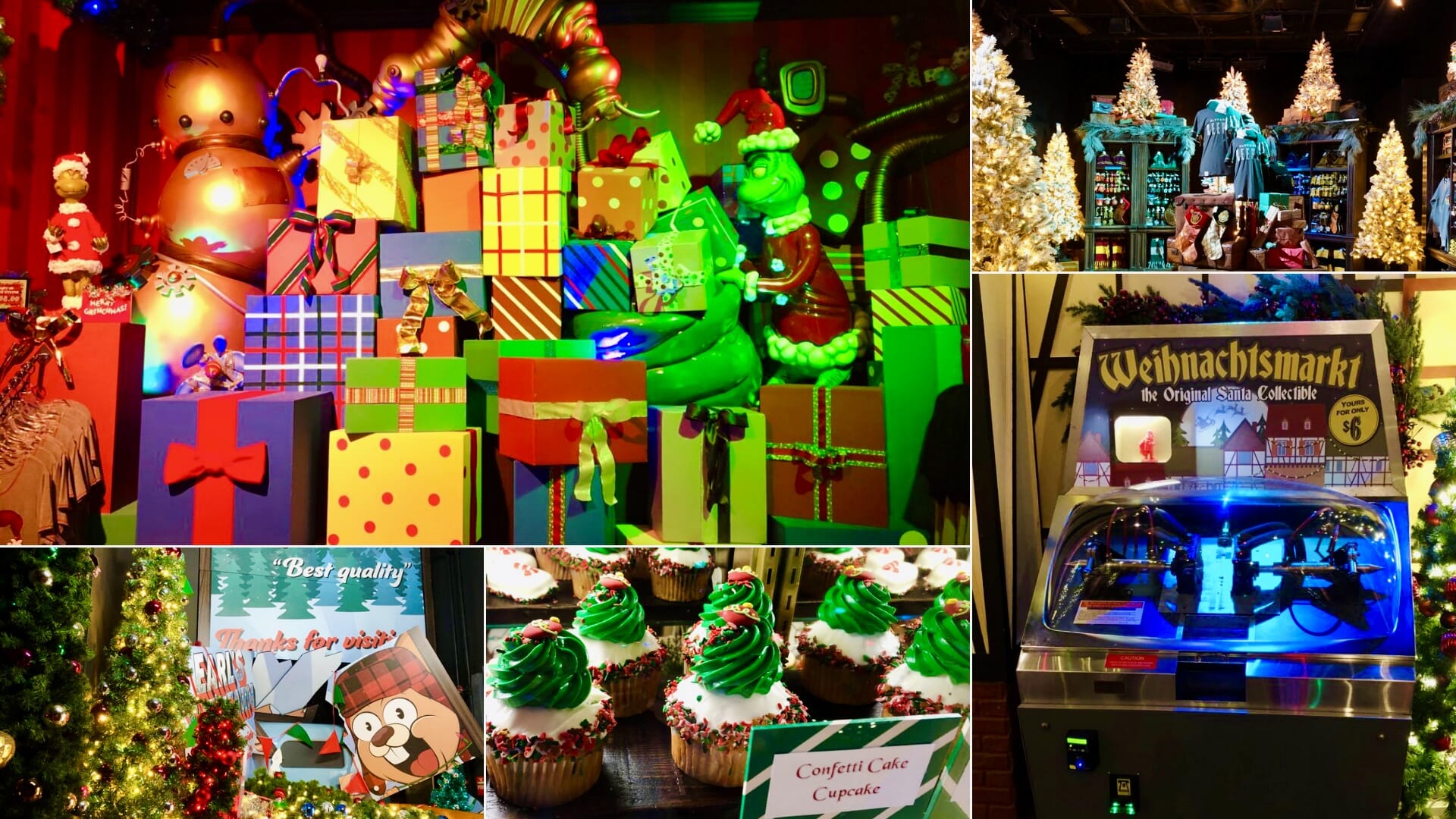 Universal Orlando Resort’s first-ever Holiday Tribute Store opened today at Universal Studios Florida. We already got a sneak peek of it yesterday, thanks to a new video from Universal, but now we’re taking an in-depth look at all the features and easter eggs.

We got our first look at the nutcracker entrance facade a week ago and it still looks the same.

This is the same building as the Halloween Horror Nights Tribute Store, so you’ll likely recognize the layout.

The entryway has toys and a workbench. It seems like we just missed Santa or one of his elves whittling away.

There are several easter eggs on this workbench. You’ll probably catch the blocks spelling out “Holiday Tribute” on a shelf to the left.

The Universal Studios arch is made out of blocks.

“Sara’s kitty” on this chalkboard was the facade of the Halloween Horror Nights 29 Tribute Store in 2019.

You might recognize these blocks as Volcano Bay’s Krakatau volcano, complete with waterfall.

This stack of blocks resembles the Islands of Adventure lighthouse.

Finally, this build appears to be Hogwarts Castle.

Next, we made our way down the hallway to the first room.

This Christmas market is a winter wonderland full of toys and beautiful set pieces.

This cityscape acts as the photo opportunity.

There’s a new Santa Claus mold-a-rama that we can’t wait to try out.

The centerpiece is filled with rotating props and decorated with faux candles and garland.

You’ll notice each section of merchandise is dedicated to a different attraction or theme.

And bundle up, because it’s snowing in here!

Another toy soldier guards the exit, which will take you straight into the pages of How the Grinch Stole Christmas!

Or, as this German poster indicates, Wie der Grinch Weihnachten Gestohlen Hat! This is both a nice touch when transitioning from the German market into Grinchmas, and a reference to Dr. Seuss’ German heritage.

This room is full of bright-colored lights, all dangling from the Christmas tree in the center.

One wall features the Grinch himself with a pile of presents.

This is another great photo spot.

And we couldn’t forget Max! He’s above the emergency exit door.

The merchandise displays are designed like presents with bows on top.

In this room, you’ll find all the Seuss-inspired merchandise you could want.

Stay warm by the fire, where Cindy Lou has her own “Thing 2” stocking.

This next hallway is lined with posters and pictures from previous Universal Orlando Resort Christmas events.

Some of you might remember the 1992 Universal Studios Old Fashioned Christmas Party.

Some posters are also referencing this year’s festivities, including this “Est. 2020” Holiday Tribute Store poster.

We saw several pictures of the Grinch. You’ll also notice Hogwarts Castle lit up, Santa E.T., and even Shrek and Fiona dressed up as Mr. and Mrs. Claus.

This poster gives you an idea of what’s to come later in the Tribute Store.

These two posters reference two other events happening this year: the Macy’s balloon walk-through and the Holiday Tree Hunt.

Harry Potter fans will love the next room, which transports you right into the Wizarding World.

Bright Christmas trees are everywhere, and they’re surrounded with vintage-style luggage and packages.

You might spot a broom or two on its way to a lucky Hogwarts student.

Slytherins will be happy to see some of their items front-and-center.

Even if you aren’t a fan, this is a one-stop shop to get presents for any Potterhead you know.

An Embroidery window straight out of Diagon Alley or Hogsmeade shows off some Hogwarts uniforms.

As you might expect, there are tons of trees in this room. They’re all different shapes, sizes, and colors.

There are four food stands here in the tree farm, so you can pick up a snack before you leave.

One side has Holiday Gummy Lightz, Sticky Bunz, and Sugared Nutz.

The other side has Sweet Treatz, Hot Chocolate Bombz, and Earl’s Nutty Nog.

As we approach the exit, there’s another photo spot with an Earl’s Tree Farm postcard on the wall.

Earl has hung up some stockings spelling out his name.

The exit area is still themed to Earl’s Tree Farm, proclaiming “Thanks for visiting!” above Earl’s truck.

Thanks for following along with our trip through the Holiday Tribute Store! You can also watch our full video tour below.