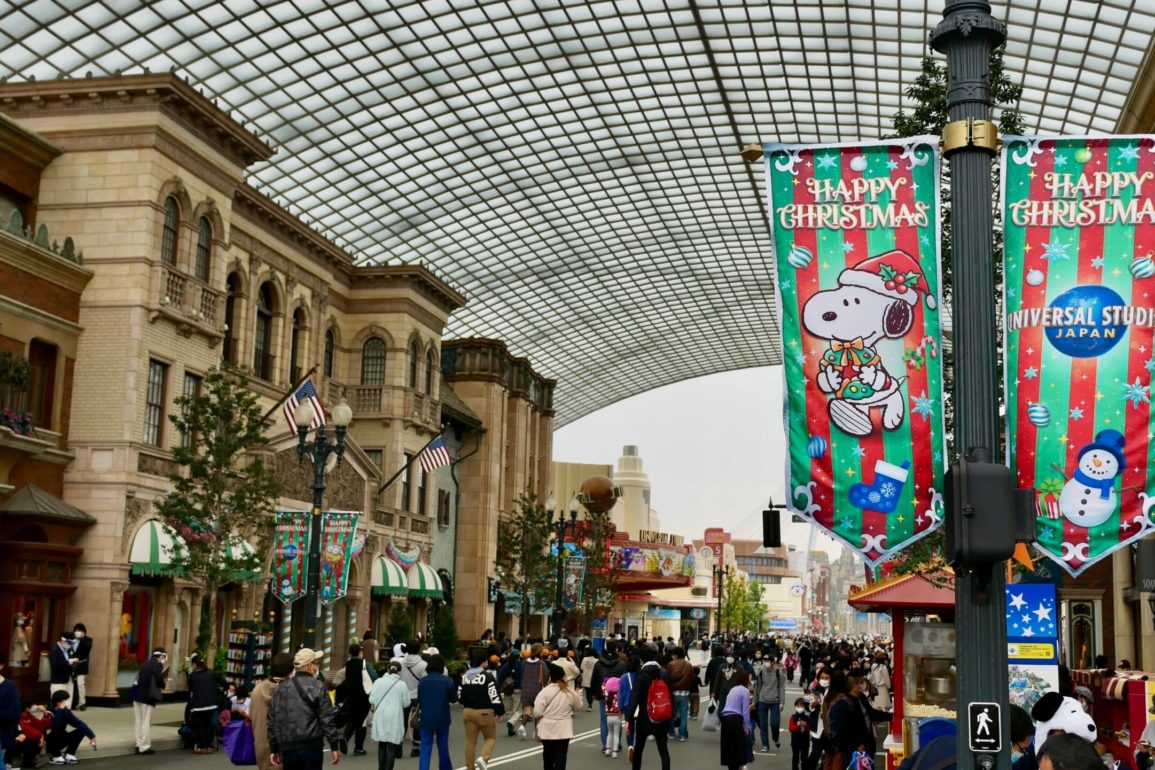 It’s the happy Christmas season here at Universal Studios Japan in Osaka, so we figured we’d take another loop around the park and soak up the spirit of the holiday season! So without further ado, let’s see how they celebrate Christmas in Osaka!

Outside the park, banners featuring beloved USJ friends like Snoopy, Elmo, and the Minions are on display along with the words “Happy Christmas”. Sure sets up the holiday spirit!

These same banners also hang along Hollywood Boulevard under the canopy.

There’s also plenty of garland and ornaments on exteriors like Beverly Hills Gifts!

There are three main popcorn buckets on sale right now—Doraemon and his Anywhere Door for the STAND BY ME Doraemon 2 XR Ride overlay, the perennial King Bob, and the Reindeer Bob with Santa Tom on top for the holidays!

Window displays at the Universal Studios Store have changed to the Minions Cozy Winter theme. You can check out every item available in this brand-new line right here on UPNT!

The Studio Guides also feature the same concept as the holiday announcement we saw a couple of weeks ago.

Under the canopy, we were able to catch Woody and Winnie Woodpecker in their hliday garb, featuring Christmas trees and snowmen as well as cute little present pincushion hats!

The open-air side of the Universal Studios Store exterior is currently under scaffolding, most likely for some touch-ups.

The new GoTo Travel domestic travel discount campaign is in full force nationwide in Japan, and Universal Studios Japan is offering a heavily discounted park ticket that also comes with discount coupons for shops and restaurants around the park. Guests must exchange these coupons in a soundstage within the park after they enter. But beware, the line can be as long as 90 minutes on a busy day!

Another new sign we saw around the park since our last visit was this new “MASK REQUIRED” sign in both English and Japanese. In our experience, however, Guests have been very compliant with mask mandates, with few isolated incidents based on anecdotal observation.

A month after its grand opening, the Mario Cafe in Hollywood is no longer drawing a long line, with the line remaining indoors on weekdays and as short as 20 minutes on the busier weekend days. You can check out our full review of every single item at the Mario Cafe from last month here on UPNT, in case you missed it!

The Mario Store is also down to queues of only a handful of people, if any. This is a stark contrast from last month, where lines reached as long as 60-90 minutes even on weekdays! This store is home to the “Whose Cap?” line, which you can also find here on UPNT!

Next door, it looks like Hello Kitty is decked out for the holidays, with whiteish purple trees flanking the front doors, along with heart-shaped ornaments!

Wait times were fairly low at the park since it was a weekday. Even the most popular attraction, STAND BY ME Doraemon 2 XR Ride, was only at two hours, with just over an hour for Hollywood Dream – The Ride and Backdrop.

Around Mel’s Stage, home to shows like Happy Christmas Street Party and Power of Pop: Christmas Edition, these new snowflake markers have taken the place of the zombie markers from Halloween to ensure social distancing among Guests.

Over at Hollywood Dream – The Ride, the five songs available to Guests are as follows:

“Osaka Tokyo” is scheduled to be part of the attraction through November 29th, and “Gurenge” is set to depart on January 31st, 2021.

Over in New York, the scaffolding covering one of the fake exteriors for Terminator 2 3-D has disappeared since our last visit in October.

While we originally predicted that New York Christmas Wish would take place on this newly-completed stage, as had last year’s Christmas show Crystal Promise, it seems that this stage will remain dormant this holiday.

Instead, we see the stage within the Streets of New York as the home for the show. It’s all dolled up in holiday garland and canvasses depicting a café, which is the setting for the show.

Over in Minion Park, the Minions sure have decked the halls for the holidays! Even Bob can’t be too upset with his little holiday popsicle and scarf!

All over the mini-land, there’s yellow garland and tons of ornaments. Even Gru’s house didn’t miss out!

San Francisco Candies has been transformed into Happy Christmas Gifts for the holidays, featuring the Peanuts holiday and Minions Cozy Winter merchandise lines.

In Amity Village and other areas across the park, these little gas heaters have been installed to keep Guests warm in the chilly Osaka winter. Although it was about 70 degrees and they were still turned on so if anything, it almost felt like summer again.

Over in The Wizarding World of Harry Potter, Hot Butterbeer has returned to the streets of Hogsmeade! Luckily we were able to give it a try a couple weeks ago in Universal Studios Florida for a review! I’ll tell you right now—it tastes exactly the same in Osaka!

The Magic Neep has quickly become a popular spot at Universal Studios Japan as these Hogwarts House Churritos rotate in and out daily. Everyone wants to share their House pride!

Right in front of Universal Wonderland, the Hello Kitty, Elmo, and Snoopy statues have been dressed up for the holidays along with a Christmas tree that seems to pay a bit of homage to the world-famous A Charlie Brown Christmas tree… albeit a bit more living.