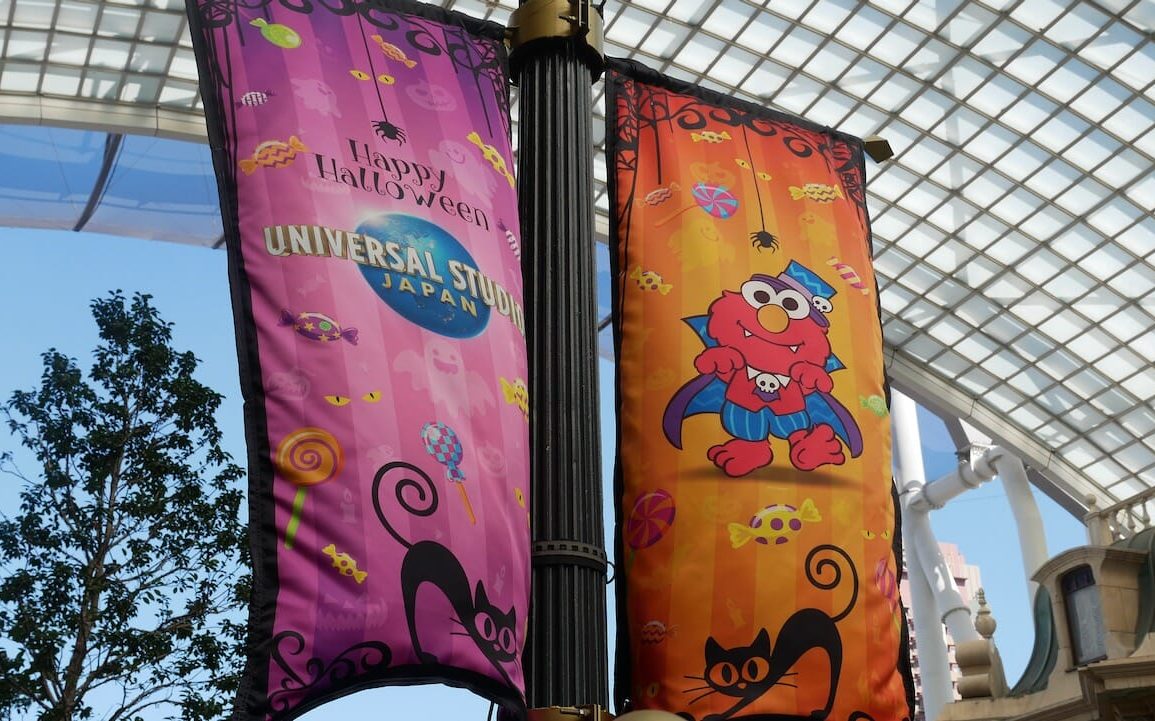 Happy boo-lated Halloween from Universal Studios Japan! We’re checking in towards the end of spooky season here at the world’s most visited Universal park, so let’s check out the latest developments here in Osaka!

Outside the park, banners outside the park signify Halloween at the park! We’ll take a closer look at these once we get inside. Halloween continues at Universal Studios Japan until November 8th!

One of the best views on the way in is capturing the grand gate with Hollywood Dream: The Ride in the background.

The park has shifted protocols a few times with temperature checks. First it was forehead, then wrist, now we’re back to foreheads.

It’s a beautiful, sunny day here at the park!

The Halloween banners include beloved USJ characters in their Halloween garb, including Elmo, Hello Kitty, and Charlie Brown! All of these characters are actually out in the park for Guests to meet!

A couple of weeks ago, we covered the grand opening of the new Mario Cafe & Store. The waits still haven’t subsided, with waits for the Mario Cafe still exceeding 20-30 minutes, and Mario Store waits at around 45-60 minutes. You can check out our review of everything at the Mario Cafe here on UPNT, as well as every item at the Mario Store.

Stand By Me Doraemon 2 XR Ride is still occupying the Space Fantasy: The Ride space through January 6th. If you want to ride, better prepare for a 150-180 minute wait, even on slow days!

As we mentioned earlier, Terminator 2 3-D is still closed, and has been since mid-September. Come back to us, Arnold!

A new stage has popped up in the New York section. With reduced offerings coming for Christmas 2020 at Universal Studios Japan, this might be the home for one of the new shows!

Since Terminator closed in September, this scaffolding has popped up around the theater facade.

Over in the back of the park, squeezed between Waterworld and Amity Village, is the future entrance to Super Nintendo World. Come spring 2021, we’ll all be able to enter the world of Mario!

JAWS was closed through most of September, so now we can once more sail through Amity. But beware the shark!

In the distance next to JAWS, we can just peek at the top of Super Nintendo World. I’m so ready to jump and grab coins next year!

Over in The Wizarding World of Harry Potter, Hogwarts Castle is shining in this weather, with beautiful blue skies. The lake feature is unique to Universal Studios Japan, providing a vastly different vista compared to Orlando.

And just like from Amity, you can see just the very top of Super Nintendo World in Hogsmeade.

And that’s the latest from Universal Studios Japan! Do you wish you could spend spooky season here in Osaka? Be sure to let us know in the comments below!