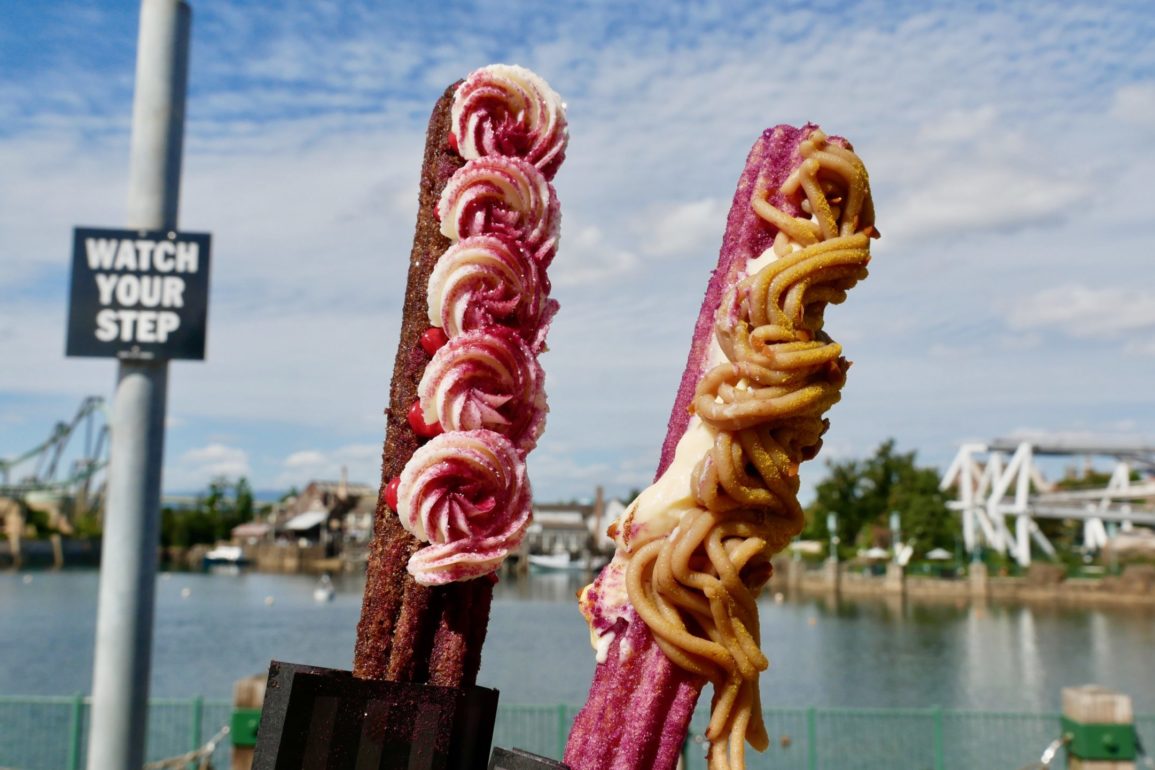 Halloween may be a scary time for our eyes and ears, but it shouldn’t be for our taste buds! And while I’ll usually laud Universal Studios Japan for its higher caliber of food, the park seems to have hit a bit of a mixed bag with their new Halloween Churritos, announced last month. One of them is passable, the other one you might want to pass on this year. Which is which? Better read on to find out!

Both of these Dolce Churritos are available at the food wagons within Universal Market in New York for ¥600 each. There are two varieties—No-Bake Cheesecake and Pumpkin Chestnut. There’s also a small discount for Annual Passholders.

One of these looks like their picture, and one really does not. Can you guess which is which?

Each of them are served in these special black “Halloween Sweets” wrappers.

How do they taste? Let’s start with the positive, and that positive is the No-Bake Cheesecake on the left. The cheesecake on top is incredibly rich and delicious, and combines well with the flavor of the chocolate Churrito base. The downside is that the cheesecake topping is served cold, which makes the top part of the Churrito cold. But the melty dark chocolate interior in the rest of the churro is gooey and balances bitter and sweet perfectly to create the otherwise ideal Halloween Churrito!

The Pumpkin Chestnut, on the other hand, leaves a bit more to be desired. Primarily because the chestnut icing fell off my Churrito to a napkin the moment after I snapped that last picture. Don’t get me wrong, it’s a great savory flavor to contrast the typical sweetness of a Churrito, but it would’ve been better had it not fallen off my Churrito. As with the No-Bake Cheesecake version, the icing atop makes the top segment cold, but the rest of the churro is relatively warm. This one was served to me much more stale than the last ones, which is a common problem at Universal Studios Japan unless you’re lucky enough to get the freshest batch. The pumpkin flavor of the Churrito itself didn’t stand out too much, but it wasn’t particularly messy either. It could’ve been a lot worse, but also this could’ve come out far better. Definitely stick with the No Bake Cheesecake version.

These Churritos are on sale at Universal Studios Japan through November 8th! Which of these two would you like to try more? Be sure to let us know in the comments below, or on social media!