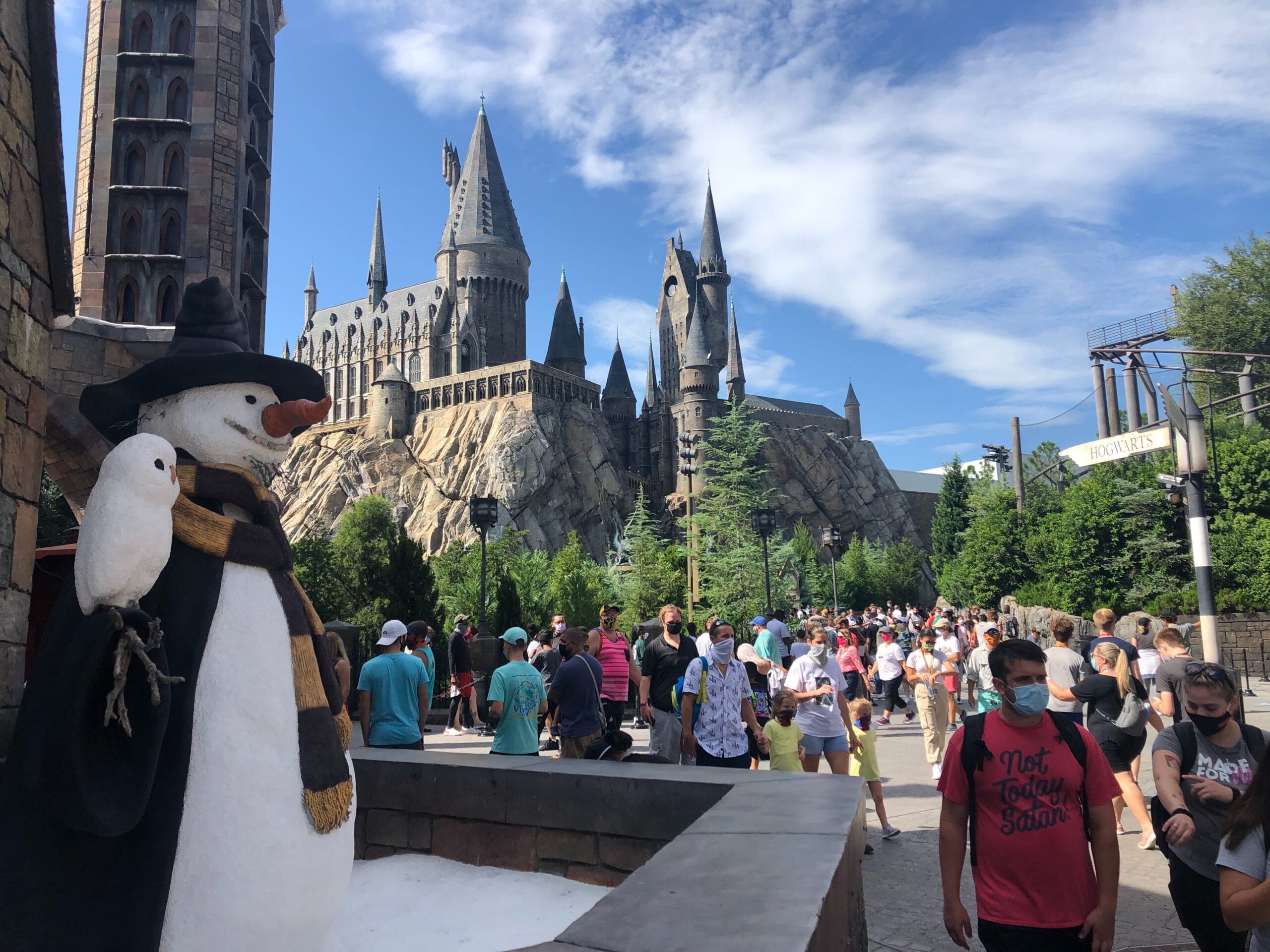 After two crazy days leading up to Labor Day, we were ready to face the holiday crowds. As we arrived, there was significantly less traffic and parking was a breeze, much to our surprise.

Things moved surprisingly fast, and Team Members were there to politely remind guests to social distance from other parties around them in line.

We headed over to Islands of Adventure first and it was somewhat quiet at opening. After the crowds we saw at security, the park seemed quieter than we expected. Maybe people didn’t want to attempt the parks on a holiday after seeing all three parks reach capacity for two days in a row.

The line for Harry Potter and the Forbidden Journey was creeping onto the bridge towards Jurassic Park, but we also spotted more tape markings along the ground so the queue could wrap back around towards Hogsmeade if necessary.

Team Members around Hogsmeade were also encouraging guests to continue moving and not just stand around in the high traffic areas.

The Hogwarts Express Hogsmeade Station had extra barricades set up in anticipation of lines, but the wait was only 10 minutes when we walked by.

We decided to head over to Universal Studios Florida and see if it was possibly more crowded over there.

There were lines for food around lunch time, but nothing as crazy as the weekend.

The Trolls stopped by and waved in the windows at guests dining in Springfield. It was fun to watch how excited people got in the restaurant while the Trolls played around.

Much shorter lines for drinks today, too.

We’ve been spotting a lot of Team Members taking time to ensure things are clean around the park.

And I thought I had a fun job.

Rain hit, and even though it wasn’t bad, many guests ducked under awnings for cover. Being experienced with bad weather here at Universal Orlando, we know that there are several rain shelters around the park, including Universal Studios’ Classic Monsters Cafe.

Monsters Cafe is not serving food and is normally closed, but during storms they will open up to allow guests to social distance and stay dry.

We had the entire place to ourselves, aside from a few Team Members.

It seems like the weather cleared out the park a bit, but we still found a lot of people sticking it out. The Bourne Stuntacular had a line that stretched down the street. There was a Team Member out helping guests line up and maintain distance from the party in front of them.

Inside the Halloween Horror Nights Tribute Store, and new “Horror Throwbacks” Chance poster is available for $15.

We also saw some adjustments being made to the Universal Studios Pumpkin Mold-A-Rama machine. Many of them had burn holes on the first day, but we know they’re working on fixing the problems. These are great souvenirs for just $6.

The entrance to Harry Potter and the Escape from Gringotts has been crowded all weekend, but we walked up and found it completely quiet.

The crowds were definitely out and about in Diagon Alley, though. Everyone wants ice cream from Florean Fortescue’s Ice Cream Parlour.

The parks were prepared for the busy holiday weekend crowds, and we think they did a great job all around.

It’s been a long day, so we’re heading out of here. Thanks for joining us through this crazy Labor Day weekend. If you’re curious how the crowds looked this weekend, check out our photos reports from Saturday and Sunday, and be sure to keep following Universal Parks News Today for more updates!.