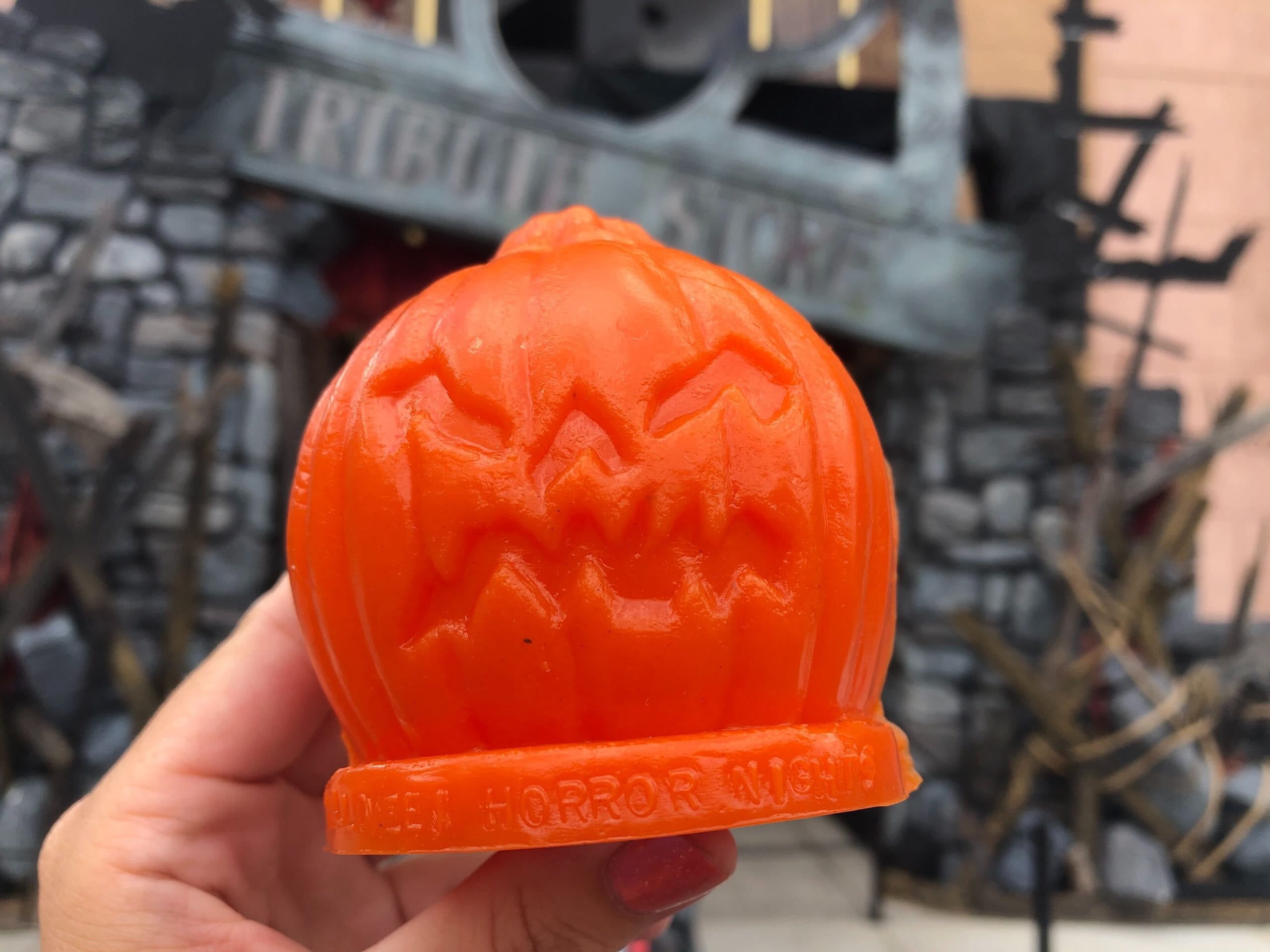 Welcome to another busy day here at the Universal Orlando Resort. The crowds this week have been growing slowly as we head into the holiday weekend and Universal has been getting ready. We’ve seen a lot of preparations around the park, including a new mobile ordering option for the Halloween Horror Nights Tribute Store.

If you’re visiting Universal Studios Florida and want to grab a snack from the Tribute Store, you can skip the line and mobile order through the Universal Orlando app. There was a podium to the right of the entrance with Team Members ready to fill your order.

September 8 from 1 PM to 4 PM, guests can meet artist Luis Orazi for a special signing event. A same-day purchase is required and there is a limit of 2 signatures per guest.

A new Universal Studios Pumpkin Mold-A-Rama machine has arrived inside the second room of the Tribute Store.

We’ve spotted a lot of extended queue areas, including this one near Men in Black Alien Attack. The smoking section that is normally here has been moved over to the bridge for now.

We spotted a pumpkin plush prize at “Flunk or Dunk”, one of the Simpsons themed games in Springfield.

Inside the MIB Gear Shop, there is an entire section of candy all discounted for $1. Everything is just $1. There is candy from the Wizarding World, Toothsome Chocolate Emporium, and more. We grabbed a couple of things to help get us through the weekend.

The stage near Central Park Crepes has one set of barricades down and there are a few planters lined in front now.

Islands of Adventure has a new UOAP Lounge in the Jurassic Park Discovery Center. It’s a great use of the area that allows passholders to dine with the dinosaurs. Be sure to check out our full tour of the area for more details.

Another way Universal is attempting to enhance the guest experience is by adding Plexiglass dividers between the Coca-Cola Freestyle Machines. We spotted them installed at The Burger Digs. This will allow more guests to refill their beverages at the same time. Prior to these dividers, the center machine would be turned off so that guests could social distance while grabbing a drink. The drink lines are usually long, so this is a very smart move.

We also noticed that the construction walls near the bypass bridge were pushed back near the smoking section in Jurassic Park. Maybe this is a sign we could possibly see this bridge open for guest use again during busier times (it opened a day later, and provided us spectacular views of the upcoming “Velocicoaster”.)

We spotted a lot of prep for holiday crowds, including this long wall of barricades from Seuss Landing all the way through the Lost Continent.

That’s all for this visit, but be sure to keep following for even more updates from Universal Parks News Today.

REVIEW: Guava Pastelito is a Sweet New Addition to Natural Selections in Jurassic Park at Universal’s Islands of Adventure