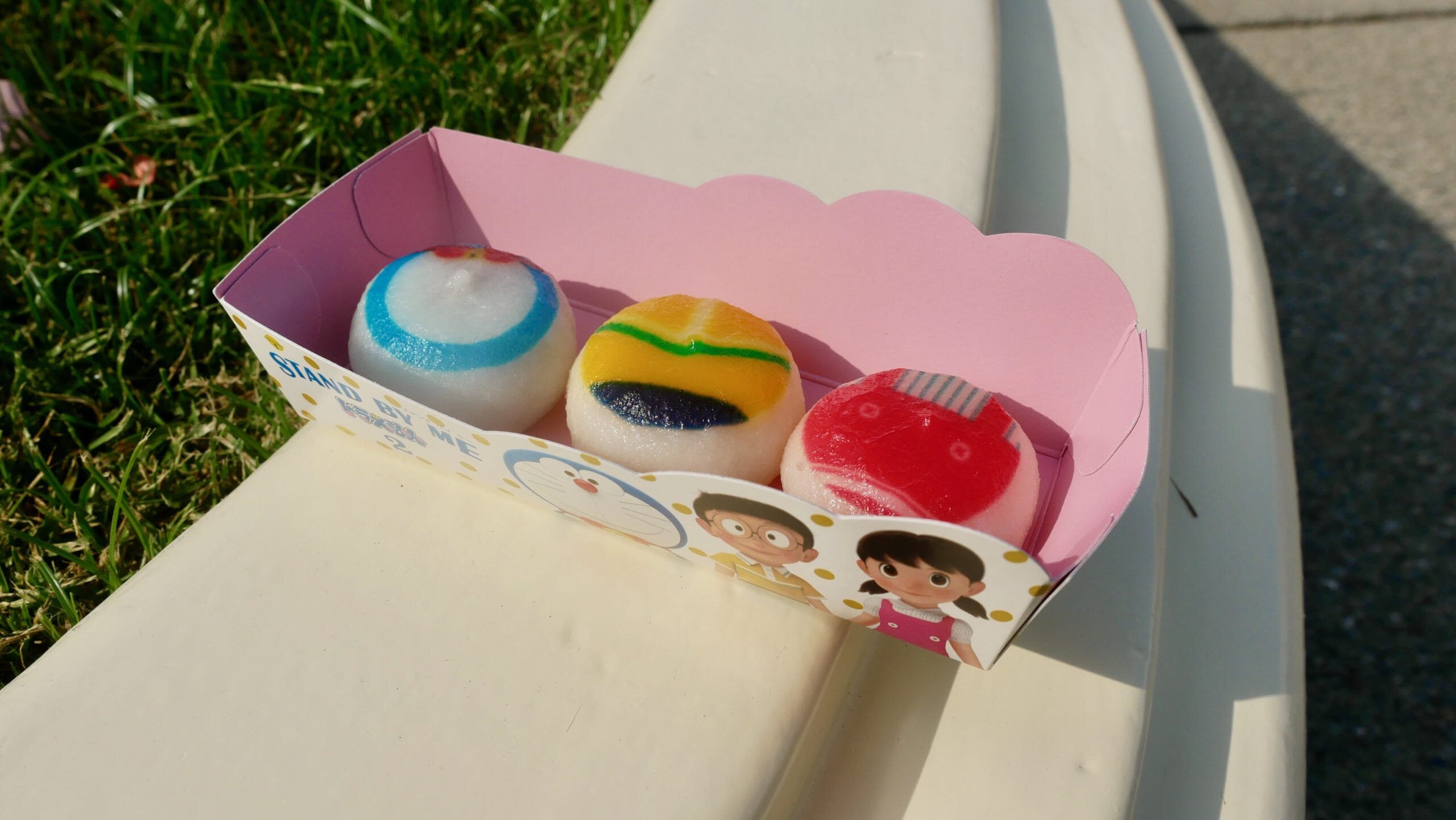 No Japanese theme park ever commemorates anything without cute food to match. And with the new STAND BY ME Doraemon 2 XR Ride drawing Guests to Universal Studios Japan in Osaka, there’s a quite a few delicious treats you can gorge on during your visit! One of my personal favorites was the Doraemon dango, which are Japanese dumplings very similar to mochi. Each dango is filled with a unique flavor that blends Japanese and Western together for a surprisingly delicious combination! Let’s dig in, shall we?

There are a few themed treats available at this booth—a special dorayaki (Japanese pancake with red bean filling)-flavored popcorn, since dorayaki is Doraemon’s favorite treat, a special “blue ice” Sofrozen flavor (with the option for an adorable Doraemon souvenir cup), and the Doraemon dango we’re trying today!

Each of the three dumplings is themed to one of the iconic anime’s main characters—Doraemon, Nobita, and Shizuka. The top of each dango even features a printed design!

And the packaging is no less cute, with pictures of the three characters in their CG form for the upcoming STAND BY ME Doraemon 2 film!

The Doraemon dumpling features an outline of his stomach, complete with a round white chest, red bow tie, and bell around his neck. Each dumpling is generously filled, with this one being a combination of azuki red bean paste and cream. If you’ve never had azuki red bean paste, it has a rather savory-sweet taste similar to sweet potatoes, but slightly sweeter. It’s a very common component of Japanese sweets and desserts, and tastes here exactly as it should, which is delightful!

This dango’s print resembles Nobita’s iconic orange shirt with white and green stripes. Inside, there’s a rather unique combination of banana cream and kinako, which is roasted soy flour, and is also a common flavor of Japanese sweets. These two tastes combine relatively nicely, with notes of both banana and kinako detectable. Kinako has a very earthy taste, the closest description I can think of is that it’s similar to roasted peanuts, with a more powdery, ground-up texture to it. This was a pleasantly surprising combination, and I’d love to eat more of just this one, honestly!

And last but not least, this dumpling features Shizuka’s pink overalls. I’ve had a lot of hit-or-miss experiences with sweet potato flavoring. This was probably my least favorite of the three. I couldn’t pick up either sweet potato or custard flavor, it was rather bland. Fortunately, the other two delicious dumplings make up for this rather underwhelming finale. Try this one first or in the middle, so you don’t have to finish on this note.

All in all, I’d recommend these both to Western and Japanese Guests. With its unique flavor combinations that blend Japanese and Western flavors, these delectable dango dumplings are an excellent fit for everyone! You can pick these up at the food booth outside STAND BY ME Doraemon 2 XR Ride in Hollywood at Universal Studios Japan! There’s sometimes a line, so be sure to get there as soon as possible!