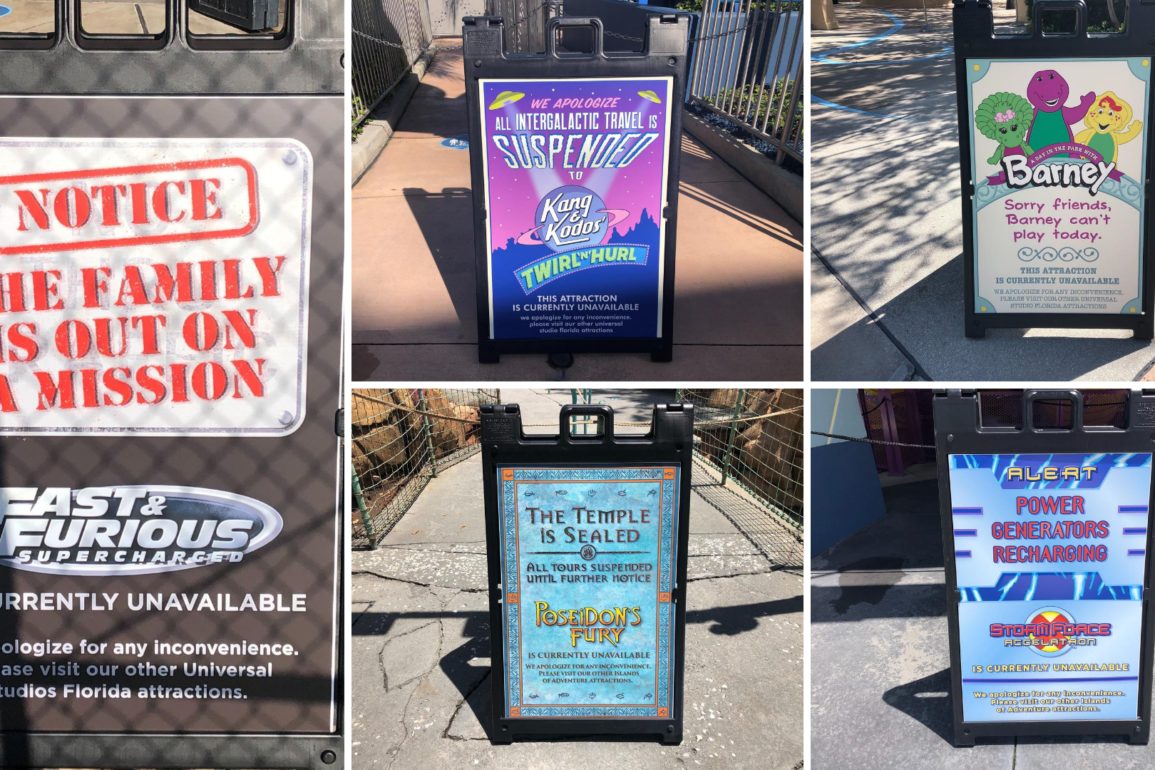 With today marking the first day of temporary closures for several attractions around Universal Orlando Resort, signage has been erected to notify guests of the changes.

Outside of Fast & Furious: Supercharged, the gate is closed, with a sign visible through the fencing.

The “No Trespassing – Keep Out” sign is incredibly appropriate now.

The sign reads: “NOTICE: The Family is Out on a Mission. Fast & Furious Supercharged is Currently Unavailable.” It follows with the phrase “We apologize for any inconvenience. Please visit our other Universal Studios Florida attractions,” which we saw on similar signage throughout the park.

Custom Gear remains open, though the attraction’s exit is roped off.

Over in Springfield, Kang & Kodos’ Twirl ‘n’ Hurl also has a sign indicating its closure.

Each sign is themed to its attraction, with this one reading “We Apologize. All Intergalactic Travel is Suspended to Kang & Kodos’ Twirl ‘n’ Hurl.”

It’s an equally less than super-dee-duper situation in Woody Woodpecker’s KidZone where performances of A Day in the Park with Barney have been suspended.

Fear Factor Live was also listed among the closed attractions, though with it being a stage show with actors, it hadn’t reopened with the parks back in June.

As we move over to Islands of Adventure, mere mortals can breathe a sigh of relief, as Poseidon’s Fury has joined the temporary shutdown.

This sign reads, “The Temple is Sealed. All Tours Suspended Until Further Notice.” Lord Darkenon won’t be pleased.

Finally, at Marvel Super Hero Island, Storm Force Accelatron has powered down for the time being.

In keeping with the sign theming, this one reads “ALERT: Power Generators Recharging.” Hopefully Storm will return to save the day soon.

Keep reading WDWNT and Universal Parks News Today for continuing coverage, including when these attractions reopen.